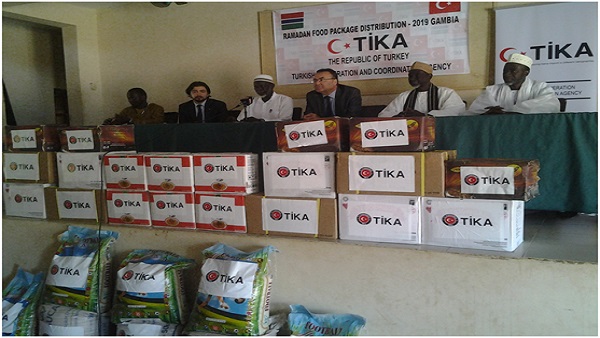 The Turkish Embassy in The Gambia through the Turkish Corporation Coordination Agency, Tika last Friday donated eight tons of food items to the Gambia Supreme Islamic Council. The voluntary gifts are for onward distribution to needy Muslims.
The provisions are part of ongoing Ramadan food package distribution by the International Development Assistance Agency of the Turkish government.
Two hundred bags of rice, 20 bags of sugar, 20 cartons of dates and cooking oil were some of the items donated at the GSIC grounds in Kanifing.

Speaking at the event, the first vice president of the GSIC, Imam Sheriff Malick Badjan, praised the Turkish government through its Ambassador to The Gambia, Ismail Sefa Yuceer, for what he described as “a noble gesture” towards the needy, “especially coming at a time when improving the welfare of the needy and vulnerable is much appreciable to the Creator [Allah]”.

Imam Badjan promised that the Council will do its utmost in ensuring that the donation reaches the needy and less privilege in society.
Turkish Ambassador to The Gambia Ismail Sefa Yuceer said the donation demonstrates the existence of long cordial relations between Turkey and The Gambia, which he described as moving from strength to strength.

Ambassador Yuceer said the voluntary gifts arrived at the “most important time” in the holy month of Ramadan, adding thousands of other items were and would be distributed to other institutions to support the needy.

“Ramadan is practically important for our religion and it comes at a time when it catches the Turkish corporation and solidarity to the needy Muslims,” the ambassador said, stating that one of the most important aspects in Islam is solidarity, corporation and sharing.
Tika’s country representative, Mohmet Akif Eyigum, said as the Turkish agency responsible for technical and development support to the needy, Tika believes in “corporation and that is why we are here to collaborate with the Council to extend a helping hand to the families in need for this special month of Ramadan.”

He noted the items are meant to support about 200 needy families across the country, and expressed hope that the items would reach intended targets.