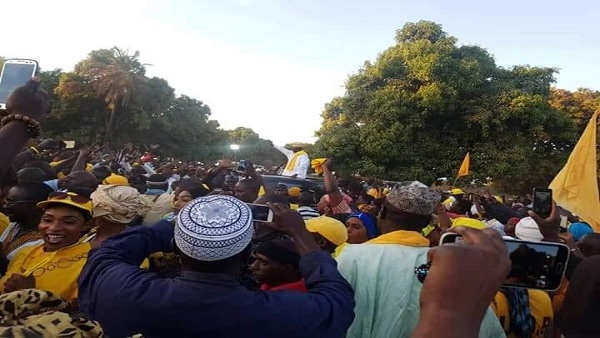 The United Democratic Party’s deputy administrative secretary, Alhagie S. Darboe has said that the National Development Plan NDP is not the only agenda of President Barrow adding that Barrow has his own political agenda. Speaking at a rally in Gunjur Saturday, Darboe who is also the national assembly member for Brikama North said:
“There is too much noise in this country about the UDP and the person who caused all these unnecessary noise is our own son President Adama Barrow and it is only him who can end this distraction by doing what he is supposed to do. I told him that he is a transitional president and that he should remove himself from politics and focus on the issues that brought him to office”.

The NAM for Brikama North called on all UDP supporters to attend meetings that are meant only for national development and not meetings that are political. ”We have been seeing meetings here and there which are political. We know what is a developmental and a political agenda. We want to tell the president to carry on with his development plan and drop his political ambition,” he warned.
Alhagie Darboe also warned that his party will consider President Barrow an ‘enemy’ if he continues to back his Youth Movement because that group sees the UDP as an enemy and as such anyone who supports it including Barrow will be considered as an enemy of the UDP.

He went on to reveal that although the president has always said that his relationship with the vice president and leader of the UDP Ousainu Darboe is good, it is clear that his relations with the UDP is not good because there is a group associated with him who sees the UDP as their worst enemy and he is fully supporting it. Today even the APRC is not seen as much of our enemy as that group and if Barrow continues to be behind that group then we will begin to see him too as our enemy,” he warned.

Alhagie Darbo advised Barrow to recognise the fact that he comes from the UDP and should not allow anything to come between him and the party. ”He should be mindful of those who are telling him the UDP is this and that,” he added. Mr Darboe said those who are between the UDP and Barrow trying to separate them should keep their mouths shut because they cannot teach the UDP how to help Barrow. “We know the power we hold in the government and nobody can tell us what to do”, he said.
He said the UDP can never hate Barrow adding that nobody can take ownership of the Coalition government and those who hold positions in the UDP should know that they are operating under the party’s principles.

However the party leader, Ousainu Darboe took a rather more conciliatory tone. “I will want to promise President Barrow that the UDP is behind him to ensure that the national development plan is achieved. We are behind him inch and inch and anybody who wants to be an obstacle to the progress of the NDP will be dealt with because the UDP will not sit and watch his intentions for this country go in vain”, he said.

The UDP leader further stressed that nothing can stop the party from forming the next government or at least influenc it. ”There may be new parties coming and it is possible that there will be a coalition but I want to call on the young people of the party to ensure that the UDP have more than 52% of the votes in 2021. That should be our target and we should start working towards that now so that the issue of a coalition don’t arise”, he said.
Without giving names the UDP leader said there are parties whose congresses lasted barely one hour adding that a party whose membership is not even more than the Gambia Red Cross Society is not a serious political party. “Let us tell one another the truth. The UDP does not underrate any political party but no political party should underrate us,” he concluded.