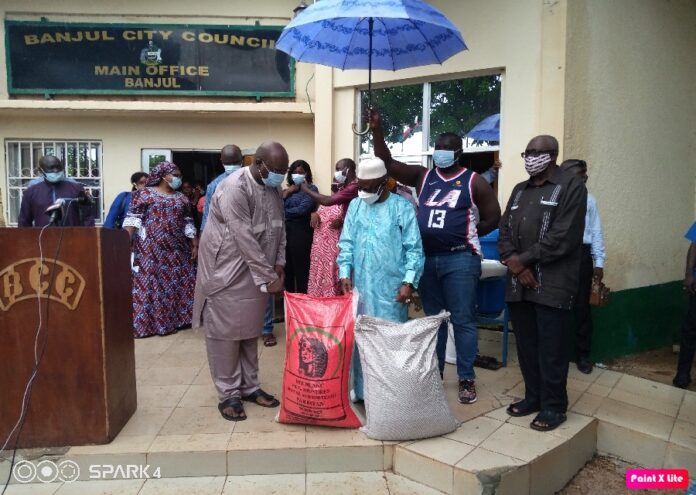 Speaking at the presentation, Ousainu Darboe, UDP leader, said the establishment of the Food Bank Initiative called ‘BUNTUNG’ was to offer assistance to Gambians as the coronavirus continues to disrupt economic activities.

“Four months ago when the pandemic entered The Gambia, people were left wondering how they would really cope with the negative impacts of the pandemic. State of public emergencies were declared, which led to the restriction of movements, with the consequences of affecting the earning capacity of individuals,” he said.

Darboe said he felt the need to take part in helping the underprivileged, hence the Buntung initiative.

He appealed to Gambians and friends of The Gambia to donate to the Initiative, adding that the response so far has been very positive.

“Gambians both home and abroad have contributed generously to towards these efforts, and we have distributed in the past 2 days to Brikama Area Council, Kanifing Municipal Council and on Monday we will go to other regions,” he said.

He took the opportunity to thank all those who contributed to the success of the “BUNTUNG”.

Receiving the food items, the CEO of Banjul City Council has expressed appreciation to Darboe and team for their participation in the fight against COVID-19 in a form of food packages for the vulnerable families in Banjul.

He described the donations as a great addition to Banjul while assuring the donors that the items will be distributed as expected. “I am very happy and I believe this donation is timely and it will go a long way in completing the efforts of Banjul City Council and helping the people of Banjul,” he said.

Also speaking, Rohey Malick Lowe, the Mayor of Banjul City Council, also took time to thank Darboe, describing him as her mentor. “I don’t have much to say, Honorable Darboe, my father, my party leader, my mentor and my dear friend on behalf of my family, the people of Banjul, we sincerely thank you and your committee for empowering us, and this is timely,” she said.

She also assured them that the food packages will undoubtedly reach the most vulnerable families  in the City, irrespective of political, social, ethnic and religious affiliation.

“Together we can suppress the spread of COVID-19 in Banjul and in The Gambia,” she said.