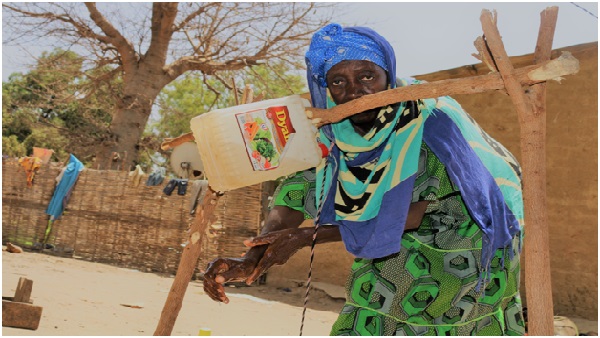 There are no doubts that COVID-19 is the greatest test of our times. Oblivious of race, status, geography or distinction, Covid-19 portends illness, deaths and economic devastation in its wake.

Declared as a Public Health Emergency of International Concern on 30thJanuary 2020 by the World Health Organization(WHO), COVID-19 was characterized as a full-scale pandemicon March 11th2020 by WHO, meaning the new disease has spread worldwide. Since then, it has confounded scientists as they scurry to find a vaccine by early 2021.
Recent projections are that despite the current low number of cases, Africa will be hit hardest by the virus pushing as many as 27 Million people on the continent to extreme poverty. With its severely challenged healthcare system, Africa is also predicted to suffer anywhere from 300,000to 3.3 million Covid-19 deaths, depending on the intervention measures taken to stop the spread, according to a report released on Friday, April 17th, 2020, by United Nations Economic Commission for Africa.

Suffering the endogenous effects as a result of the rapid spread of the virus in neighbouring Senegal, Gambians are not cushioned from the pandemic as it progresses slowly on the African continent. The combined effects of a badly affected tourism industry(one of the mainstays of the Gambian economy), reduced remittances from abroad coupled with low supplies of hospital beds, The Gambia is clearly vulnerable to the effects of the corona virus pandemic.

Government’s response may be perceived as limited … but it is vital
Since the first case of the virus was announced on March 17th, 2020, the Government of The Gambia has taken decisive measures to save the lives of about 2 million people residing in the country. One such measure was to ban all flights from Covid-19 hotspots and to place any visitors that arrive from those hotspot countries under 14 days quarantine. Furthermore, the government announced the closure of all schools and suspended all public gatherings from March 18thfor 21 days, all in far-reaching measures as part of efforts to prevent the Coronavirus and to contain its spread.

Following the announcement of government measures, there was growing concern by businesspeople and consumers over the possible disruption caused by the coronavirus, with certain segments of the society fearing that hoarding will be practiced resulting in food shortages. To assuage such fears, businesses were warned against hiking commodity prices amid Covid-19 in a press release by government cited as the Essential Commodities Emergency Powers Regulations 2020, which was intended to subsist until the end of the Emergency Powers Declaration issued on March 18th.

In a bid to bolster understanding of the impact on the economy, the Ministry of Finance and Economic Affairs current projections are that the virus will cost the economy an estimated 2.5 billion dalasis. This, coupled with an estimated deterioration in the current balance, will potentially lead to a significant decline in the international reserve cover, and could result to exchange rate depreciation and be the precursor to rising inflation.

Far from being an outstretched phenomenon, the effects of COVID-19 on a low income economy like The Gambia’s is far reaching. Not many people have access or can afford internet services. This limits the ability to implement social distancing measures such as teleworking.

Whilst the measures taken by the Government of The Gambia have been criticized, especially following the crucial vote by the National Assembly on the 4th of April 2020 to extend the State of Emergency by 45 days, due to the impact on the economic sector, the measures are necessary to stump the virulent march of COVID-19 and its devastating impact in the country.

UN System organized joint initiatives to support the Government of The Gambia
Prior to and since the announcement of the first COVID-19 case in the country, the UN System in The Gambia has organized joint initiatives to support the Government to implement its national preparedness and response plans to COVID-19. This has been demonstrated through various mechanisms including pooled funding by different Agencies, grants from IFIs, and collaboration with the private sector, INGOs, philanthropic bodies and other institutions.

In addition, the UN Agencies through the UN Country Team have provided technical support to the government by assigning technical staff to support the Government of The Gambia’s National Novel Coronavirus (COVID-19) Preparedness and Response Plan implemented by the Ministry of Health. This outlines a comprehensive approach through which the country will maximize and efficiently utilize its resources to ensure health security of its population.

Through its support to the 6 components of the government’s response plan which metamorphosed into thematic subcommittees as follows: Coordination and Implementation, Case Management of COVID-19, Logistics and Safety, Epidemiology and Laboratory Surveillance, Risk Communication and Community Engagement, and Psycho-Social Support (PSS), the UN has also supported the establishment of coordination mechanisms to ensure coherence of international community and provided both technical and financial support to national authorities to design appropriate fiscal and monetary policy responses to implications of COVID-19.

“COVID-19 will not kill us, but hunger will…”
In early April, as part of the UN Risk Communication and Community Engagement group a subset of the National Risk Communication and Community Engagement committee jointly implemented with government through joint working group for community engagement and social mobilization on COVID-19, a Government-UN Team including myself, set out on a tour of all the regions in The Gambia with a team comprised of UNICEF, RCO, a Ministry of Health and Department of Community Development official to engage community structures and proactively carry out monitoring of Risk Communication and Community Engagement (RCCE) activities essential for Covid-19 outbreak response. One of the mission’s objective was to facilitate capacity-building activities for regional RCCE committees, Multi-Disciplinary Facilitation Teams (MDFTs), Village Development Communities (VDCs) and Community Based Organizations (CBOs) that will strengthen community engagement.

According to section 193 of the 1997 Gambian Constitution, ‘Local Government Administration shall be based on a system of democratically elected councils with a high degree of local autonomy.’ This provision has led to the establishment and regulation of decentralized local government system for The Gambia, which has devolved to the formation of local decentralized structures. Drawing from lessons learnt from the successful implementation of the National Ebola Virus Disease Plan (NEVDP, 2015) the community ownership aspect had proved to be a critical success factor in the Ebola response. Relative to health systems strengthening, NEVDP, 2015,has been utilized for the development of the current Covid-19 Plan, aligned with the national disaster plan. Thus, our mission to the regions was premised on community systems strengthening, accountability to affected populations (AAP); social accountability, social and behavioral change and the integration of social norms to Covid-19 response with a conflict sensitive lens.

Driving across the regions, we skimmed through the radio waves of each region we visited and radio stations all across seemed to be speaking, as if in one voice, about the recent lockdown by the GoTG and its effects on the population. This was precursor of what would transpire across each region where we met relevant groups affected and vulnerable to the disease. Whilst many people knew about Covid-19 and its devastating impact on people’s health, the economic imperative of the lockdown garnered the biggest concern from the population. At one juncture, a community leader gave voice to the shared anxiety of the community with the words “Covid-19 will not kill us, but hunger will.”

What would happen if the lockdown persists – a significant possibility of course. How disruptive will the lockdowns be? These questions settled at the tip of my conscience as I struggled to explain the rationale to promote and sustain critical healthy behaviours and foster participatory community engagement to contain the spread of the virus.
What the UN Country Team in The Gambia is working to support
Leaning on that, The UN Risk Communication and Community Engagement team in The Gambia led by UNICEF, is working tirelessly to support the Government’s plan guided by the community engagement approaches:

Community centered and led: Support Alkalo / Ward Councilors and key community stakeholders such as religious leaders, women and youth groups to take the responsibility for the response in their communities by developing and operationalizing Community Action Plans (CAPs/PRA). The community engagement interventions need to build on existing community structures including, Village Development Committees (“VDCs”), Ward Committees, and others Community Structures.

Facilitating enabling environments for dialogue, listening and participation: The community engagement interventions will create spaces for plurality of voices/ narratives of community with an aim to link community perspectives and voices into sub-national and national policy dialogues. A key component of this will be to ensure active and meaningful participation of woman, children and youth and to promote gender equality and social inclusion.

Strengthening coordination between national and regional subcommittee: Closer coordination between the national and regional will enable better follow-up and support for all the critical community engagement interventions through all stages of planning, implementation and evaluation.
Women, Youth and Children sensitive: The community engagement interventions will ensure that this target population are seen as agents of change and as a primary participant group.

An inclusive approach: Regular and proactive communication with the public and at-risk populations can help to reduce stigma, build trust and increase social support and access to basic needs for affected people and their families. Stigma can undermine social cohesion and prompt social isolation of groups, which might contribute to a situation where the virus is more, not less, likely to spread. Accurate information can help alleviate confusion and avoid misunderstandings. Ensuring that all members of the community are represented in discussion, planning and the development of CAPs including people with disabilities and other special needs groups.

The UN System in The Gambia also played a pivotal role in leading the development of specific funding mechanisms, convening meetings with government counterparts, the private sector and international development partners, and supporting the development of a national COVID-19 response plan. Whilst there is no end in sight yet, for a corona virus vaccine may take up to a year or 18 months to be approved according to WHO, and whilst The Gambia, like all other countries of the world, is not immune from the harmful effects of COVID-19, it is assured at least that there is always a hand holding onto it in partnership and support of its efforts to combat Covid-19 and prevent its spread in its longest standing ally, the UN System in The Gambia. Afterall, supporting governments and enhancing partnerships with governments to achieve the developmental aspirations of the people is why the UN exists.

- Advertisement -
Share
Facebook
Twitter
Pinterest
WhatsApp
Previous articleLetters: Where does Imam Baba Leigh’s defence of gay rights stem from?
Next articlePetition to the US Government to end racism and police brutality
Join The Conversation

The demise last weekend of Alhaji Alieu Mboge has robbed The Gambia of a successful Public Administrator of four decades standing, and a ranking...
Read more
Feature

It was a jolting moment of disbelief when I learnt of the demise of Momodou Ceesay, Wednesday, through social media. The Gambia has lost...
Read more
Feature

A faithful Cuban doctor defending life in The Gambia

By MSc. Maria InesAlvarez Garay and Dr.Angela Otero Mustelier (*) "To graduate as a doctor is to open the doors of a long road that...
Read more
- Advertisment -