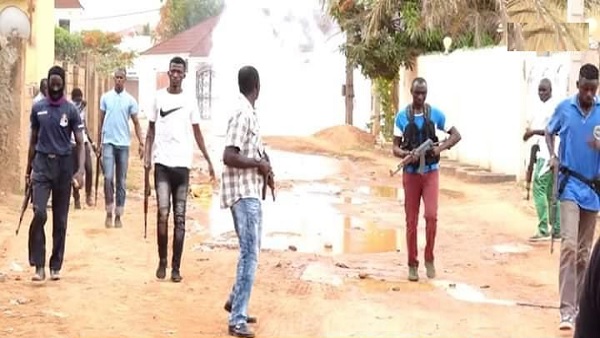 The sight of non-uniformed armed men among law enforcement officers during Wednesday’s demonstrations has caused concern and anxiety.

The video and image of the men seen clutching on to AK 47 rifles went viral, with many likening them to ex-president Jammeh’s notorious hit squad, the patrol team or junglers of the new Gambia.

Others called them militia groups. However, many who reserved and delayed their opinions pending further clarifications called on the authorities to explain.

The Standard last night contacted the police communications unit for explanations and Police PRO ASP Lamin Njie said the men are bonafide members of the CID of the police anti- crime unit who are deployed to help in securing lives and property.

“They did not have any bad intentions and are lawful members of the police force.

It is common knowledge that CIDs don’t go in uniforms.

They were deployed to help in preventing more chaos and safeguarding lives and properties when the situation got very serious on that day,” PRO Njie said.

He also added that there is no cause for alarm.

“All the alarming descriptions and noises are all borne out of misconceptions and ignorance of the operations of the police.

There is no militia or civilian armed group working with the police. All of them are police officers,” he said.