Vatican II revisited: On the equality and unity of faiths 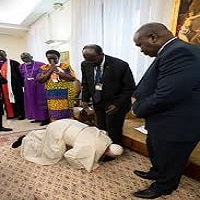 A day before Christmas 2019, Reuters quoted Pope Francis as saying to the world’s estimated 1.3 billion Catholics, and by extension the entire world community that “God continues to love us all, even the worst of us.” On Christmas day, the Pope’s message included an encouragement to human beings everywhere to “soften our often stony and self-centered hearts” and work for peace and justice around the world.

The Pope’s message touched on the existence of injustice and conflicts in many countries of the world, the plight of migrants – especially what we here call “backway” migrants – and the persecution of religious minorities, among other contemporary social ills. These are issues Francis has consistently addressed over the past seven years of his papacy, and it is his unwavering commitment to them that has earned him the sobriquet, “the Vatican II Pope” among Catholic Studies scholars. In this article, we revisit Vatican II with a view to understanding the thinking behind that momentous event especially as it relates to religious tolerance and the equality and unity of faiths.

By the end of the 1950s and with it the Papacy of Pius XII, the Catholic Church felt that it could no longer afford to wait for an invitation before engaging the world in dialogue over what it called the “signs of the times.”

While some sections of humankind were making momentous strides towards scientific and material progress, other sections stood in dire need of the barest necessities of life. Atheistic ideologies ruled nations and inspired violent revolutions. The Cuban revolution and its incipient communist ideology threatened to spread to other Latin American countries where tyrannical regimes oppressed and exploited millions of hapless citizens. In Africa, nationalist agitation for independence was culminating in the transfer of power from the autocratic colonial state to a plethora of half-baked nation states in which incipient dictatorship and conflict were already rearing their heads. The Cold War was at its height and encouraged a global politics of amorality and a tendency towards mutually assured destruction by the United States and the Soviet Union.

In the thinking of Pius XII’s successor, Pope John XXIII, the imbalances manifested in those troubling “signs of the times” could only be corrected through a sustained assault upon that “more basic imbalance which is rooted in the heart of man”. That basic imbalance that allowed humans to be cruel to their fellow humans, exploit their fellow humans, or inflict other forms of injustices upon their fellow humans. John XXIII felt that it was time to bring the Church up to date, to equip it with the tools and the spirit it needed to deal with the emerging modern world of science, technology, ideology, and increasing human prosperity that, paradoxically, existed alongside and even caused increasing human misery and vulnerability. The new pope felt that it was the Church’s mission to embrace all of humanity and to enhance and protect the dignity of the human person regardless of religious affiliation.

And so soon after his election in October 1958, Pope John XXIII announced his intention to convene an ecumenical council with a view to “bringing the church up to date” and addressing these troubling “signs of the times”. Vatican II, the council John XXIII eventually convoked in October 1962, lasted until December 1965. It was closed by Pope Paul VI following John’s death in June 1963. This was only the second general council held at the Vatican Basilica since Pope Pius IX convoked Vatican I from December 1869 to October 1870. Vatican II is credited with producing 16 documents and statements, comprising four constitutions (on the Sacred Liturgy, on the Church, on Divine Revelation, and on the Church in the Modern World), three declarations (on Christian Education, on the Relation of the Church to Non-Christian Religions, and on Religious Freedom), and nine decrees (on the media of social communication, the Catholic churches of the East, Ecumenism, the pastoral office of bishops in the Church, the adaptation and renewal of religious life, priestly training, the apostolate of the laity, the mission activity of the Church, and the ministry and life of priests).

Together, the 16 documents of Vatican II variously addressed the challenges of the modern world. A major theme running through several of these documents is the equality and unity of religious faiths. The recognition of the universal truth of all religions represents one of the revolutionary achievements of Vatican II. Vatican II affirmed that when it comes to religion, what is important is the object of worship, not the means. Since people worship the same God by other names, there is no harm and much good in willingly acknowledging the validity, equality and unity of all faiths. And that is what Vatican II does in some of the 16 conciliar documents cited below.

In Unitatis Redintegratio, the Council’s Decree on Ecumenism, Vatican II embraced Christians of all denominations. Because the highest among the Catholic hierarchy of truths is that Jesus Christ is the center of the Christian faith, the Church’s prodigal children of the Reformation (Protestants) were no longer considered enemies of Catholics. The Decree on Ecumenism holds that since all Christian communities, regardless of their specific doctrinal persuasions are unanimous in the acceptance of Christ as the Founder and sustainer of Christianity, there is no need for barriers to interfaith dialogue and a universal Christian community. As some scholars put it, Vatican II recognized that “unity in the meaning of faith” in God is not to be confused with “uniformity of expression”, or methods of worship (Gaillardetz and Clifford 2012: 176). God’s spirit fills the earth and could therefore not logically be denied presence in other faiths and other spaces – temporal, social, physical, spiritual or cultural.

In Nostra Aetate, the Declaration on the Relation of the Church to Non-Christian Religions, Vatican II affirms the Catholic Church’s acceptance of the presence of the divine spirit among all faiths and peoples. For a moment at the Council, heated controversy over the question of Jewish deicide on one hand and Muslim allegations of political interference and bias on the other threatened to derail work on Nostra Aetate. Difficult questions were raised. May the Jews be absolved of killing Jesus? May the Church rightfully be accused of siding with the Jews against the Muslims in the ongoing Arab-Israeli conflict? These two controversies were resolved by incorporating suggestions of bishops from Asia and Africa to extend recognition to not only fellow Christians, but to peoples of all other religious faiths as well (Gaillardetz and Clifford, 2012). Vatican II reaffirmed that only a small section of the Jewish community was responsible for killing Jesus. Therefore it was wrong to accuse the entire Jewish community of deicide. Nostra Aetate declares that “the Jews should not be spoken of as rejected or accursed as if this followed from Holy Scripture” (NA 4). Nostra Aetate also declares that “Humanity forms but one community . . . because all men stem from the one stock God created to people the entire earth . . . and also because all share a common destiny, namely God” (NA 1).

In addition to Protestants and Jews, Vatican II professes respect and recognition for Muslims and people belonging to other faiths. According to Lumen Gentium, the Dogmatic Constitution of the Church, Muslims “profess to hold the faith of Abraham, and together with us they adore the one, merciful God, who will judge humanity on the last day” (LG 16). Similar respect and recognition is accorded to Hinduism and Buddhism, whose followers are described as “those who in shadows and images seek the unknown God.” Following St. Paul’s example, Vatican II takes the “unknown God” of the Hindus and the Buddhists to be none other than the God of the Catholics. Here as in the Protestant, Jewish and Muslim cases, Vatican II appeals to the supreme truth that God is the God of all nations and loves all nations and peoples equally. Vatican II challenges Catholics to witness to their faith and way of life and to “acknowledge, preserve, and encourage the spiritual and moral truths found among non-Christians, together with their social life and culture” (NA 2).

In Gaudium Et Spes, the Pastoral Constitution on the Church in the Modern World, Vatican II invites humankind to engage in a process of unceasing dialogue and self-renewal which would actualize the Kingdom of God on earth. In Vatican II thinking, the Kingdom of God is not to be patiently awaited; it is to be deliberately actualized through the charitable and truthful actions of human beings. Vatican II argues that if there is one truth that the entirety of humanity could agree upon, it is that man is the “center and crown” of all earthly things. Atheists may deny the existence of God, but they may never deny the dignity of the human person. The wealthy may amass more wealth, but they may never forget, in the words of Pope Paul VI, that “the right to private property is not absolute and unconditional” (PP 23). Christians and non-Christians alike are obliged to ensure that the fruits of the earth are shared, that the needy get at least their basic needs, and that the dignity of the human person is protected and preserved from all sorts of injustices – religious, political, economic, individual and otherwise.

In the thinking of many Catholics and Catholic Studies scholars, the spirit of Vatican II lives on and is personified in the embracing character of Pope Francis who in April 2019, knelt down and kissed the feet of South Sudan’s rival leaders as he urged them not to return to civil war. 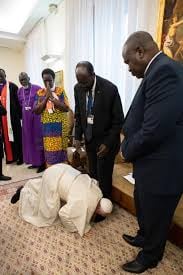