Where is the leadership to salvage mother Gambia? 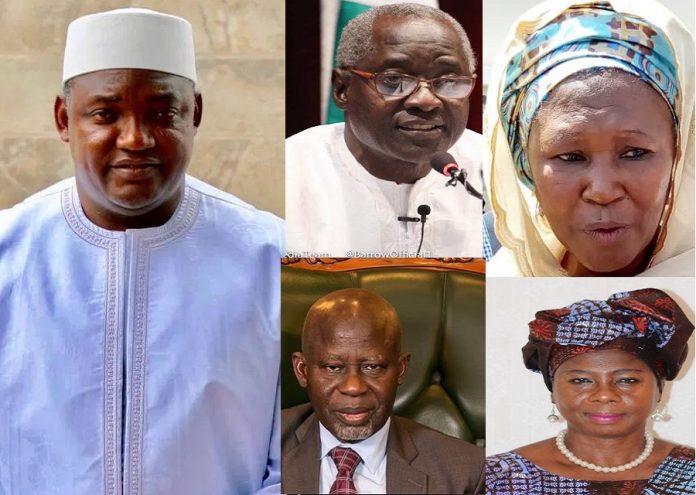 After all the speeches by the President and his Vice President and the NAMs about the State of the Nation Address and in the Adjournment Debate, what did we achieve as a people at the end of the day? What have our leaders done to take us to a better destination? I only feel more disappointed and betrayed by our leaders! They rightfully bemoaned the terrible conditions of our people but then what action was taken to address this national predicament?
All that I see is everyone washing his or her hands off the crux of the matter while blaming and counter blaming each other.

The centre cannot hold, and parts are running helter-skelter leaving the masses in the wild to fend for their daily bread on their own.

We have a Government that only takes money out of people’s pockets through terrible taxes yet provide only poor quality or no public services at all. Serre Kunda heath centre is one example which was accurately and rightly lamented by Halifa Sallah!
One wonders what the purpose of the Gambia Government is.

The current dispensation, i.e. the Government and the National Assembly came as a Coalition on the promise to give meaning to government.

But then soon after victory they broke it up with each claiming victory and righteousness.

No one is taking responsibility, and no one is willing to engage by any means to salvage the nation.

The easiest part was to form a Coalition but the hard part of it was to show effective leadership so as to maintain the Coalition effectively in order to achieve its goal of system change as espoused in their Manifesto.

If they had properly structured the Coalition from the very beginning will it break up just like that? Some claim the MoU was signed while others countered that assertion, yet no one is yet to show Gambians a signed or unsigned MoU! Who do we believe therefore?
The Coalition was co-chaired by Fatoumatta Tambajang and Dembo Bojang yet at the very beginning of this Government both of them abandoned the MoU only to join Barrow as VP and advisor respectively! Why didn’t they advise the President to stick to their MoU otherwise refuse to join him? Similarly, Halifa Sallah was the initiator and convener hence the leading champion of the Coalition.

Therefore, where the co-chairs failed why didn’t he also take up the urgent responsibility, by any means necessary to salvage the Coalition?
But what do we have today? One group led by Fatoumatta Tambajang together with PPP, GPDP, NCP and NRP said they endorse Barrow to stay on for 5 years while others such as PDOIS are neither for nor against 3 or 5 years yet others such as UDP remain silent or publicly stand nowhere when it was their party leader Ousainu Darboe who was the first to in fact undermine the 3 years agenda when he unceremoniously defended 5 years.

Therefore, today UDP cannot stand on the fence between 3 and 5 years. Meantime GMC dissociates from the 5 years camp but did not also say if it’s for 3 years while their party leader remains an adviser to the President who is the centre of this political hurricane.

Is this the kind of leadership this country deserves? Why are all these political parties and their leaders abandoning The Gambia in mid-air? One would have expected that at least one party or one leader will stand up to demand adherence and respect for their MoU and all of its agreements, not by lip service but in practice! Unfortunately, everyone keeps their hands off! Therefore, the confusion and dilemma in this country that Halifa beautifully described is caused by none other than they, the political leaders themselves!
Leadership is neither free nor cheap. Leadership is about matters of life and death. Let us not allow our leaders to play with our lives.

Martin Luther King said a genuine leader is not a searcher for consensus, but a molder of consensus. Hence we should expect our leaders to be relentlessly and vigorously running after each other; pleading and crying out to each other with patience and humility just to get consensus for the good of the country.

My fellow citizens, let us hold our leaders accountable and punish them for their poor performance and poor leadership. Let us not buy cheap leadership full of bluff! A former American First Lady Rosalynn Carter once observed that a leader takes people where they want to go.

But a GREAT LEADER takes people where they don’t necessarily want to go, but ought to go. Therefore, our Coalition leaders cannot abandon the ship midway but must take this country where it needs to go.

Within three years our political leaders could have achieved a lot for the country even when they destroyed their Coalition. But for three years none of the parties of the Coalition has taken any pragmatic step to salvage the country through their NAMs in parliament.

With or without tactical alliance there is nothing that stops these parties and their NAMs, if there is the will, to support a private member’s bill to amend the Constitution and other laws or bring motions on the floor of the parliament to scrutinize and discipline the Government.

Look let us realize that this talk about tactical alliance is mere diversion.

What guarantee is there that a tactical alliance will work as expected? Didn’t we see some NAMs abandon their parties to side with President Barrow? Therefore, even if we have all NAMs under the Coalition ticket it could be possible that some will abandon the Coalition agenda to go with Barrow.

Barrow did not abandon the Coalition agenda because of the so-called tactical alliance. Barrow would have done the same even if the Coalition contested the National Assembly election as one bloc.

Therefore, the issue is not the presence or the absence of tactical alliance. The problem is that our leaders just reneged on their own agenda. This is the truth!
If we could have Hon.

Sidia Jatta pass a motion to compel the President or his Vice to come to the People’s House and succeed, why then did they not use that same power since April 2017 to change laws and combat corruption and tame the Executive? We had seen most NAMs support that motion even though they are neither PDOIS NAMs nor are they on a Coalition ticket rather they belong to different parties.

Therefore, the so-called tactical alliance is not necessarily an opportunity or an obstacle.

In fact, I strongly believe that it serves us better to have NAMs on party tickets than on Coalition tickets so that we could easily identify those NAMs who would betray the cause! Secondly it prevents non-Coalition parties from assuming leadership of the Assembly as Majority and Minority leaders. Today those leadership positions are in the hands of Coalition parties (UDP and NRP).

But what use do they make of those positions?
Sadly, our political parties and their NAMs only watch as the President and his Government bastardize this country beyond repair! In multiple occasions this parliament should have passed a motion of no confidence in this Government or even impeach this President, yet they failed to do so.

Since January 2017 to date the incidence of corruption and inefficiency and disregard of the rule of law perpetrated by this Government beats imagination! Yet not only our political parties stay mute in most cases, but they also do not use their NAMs to bring the Government to book as we see in other democracies.

Only once was a private’s members’ bill employed in the Assembly and it was by the Minority Leader Samba Jallow and supported by the entire House because that bill concerns their security of tenure.

If the Minority Leader could do that then what stops him or any other Member to also put up a bill to amend constitutional provisions that the Coalition had identified for amendment in their own Manifesto? But not only has NAMs failed to undertake such initiative but we have not also seen any party or NAM take the Government to court for corruption or call its supporters to protest the uncountable acts of misconduct by this Government!
Even when the President sacked a sitting National Assembly Member, we did not see the National Assembly undertake efforts to defend their colleague and constitutionality and democracy! It was Ya Kumba Jaiteh herself, not even her Party UDP nor the National Assembly, who took the matter to court! How then will we have good governance and sustainable development?
Even though the Vice President did appear to answer to issues in the State of the Nation Address yet the NAMs were not satisfied with both the Address and her answers generally.

But what will NAMs do next about that? Every NAM did make very inspiring and apt statements, but will it just end there? Or will they take further action to discipline the Executive to address the urgent concerns and plight of the people? Time will tell.

Meantime our NAMs continue to refuse to lead and coordinate among themselves for the purpose of national salvation.

The parties don’t talk to each other.

The leaders despise and distrust each other but spend their best time ridiculing each other yet we expect this country will salvage.

Countries that progress do so because various parties and leaders come together despite their differences to forge a common ground for national salvation.

Why does this not happen in The Gambia? Let us not lower the bar for our leaders. Our country is crying for leadership, yet none is providing it! Unacceptable!
Let us bear in mind that it took our leaders 20 years before they could form a coalition that finally ousted the Dictatorship.

They had formed NADD more than 10 years ago but destroyed it among themselves. Then they formed various tiny coalitions in 2011 only to be crushed by Yahya Jammeh at the polls.

Therefore the 2016 Coalition must not make us forget they came on the heels of a history of massive failures on their part for 20 years thereby allowing dictatorship to thrive in this country.

Therefore, let us put pressure on these leaders to solve the mess they created by themselves.

We cannot wait for another generation just to salvage the Gambia which is already more than 50 years old and highly indebted, poor, backward and corrupt! We did not ask these leaders to lead.

They presented themselves and were elected by the people.

We did not ask them to form a Coalition. They did it by themselves.

It was on the basis of their word that we gave them our mandate and power. Therefore, they must deliver.

We don’t have the time and energy to listen to high sounding slogans and accusations and counter accusations.

Let us tell these leaders that people don’t eat words.

It is bread that people eat.

We need water and electricity, good roads and good hospitals and better life and affordable cost of living. It is easy to claim victory but that’s just words.

We need practical solutions. Leaders are meant to produce solutions! Nothing more, nothing less. That’s all.

The centrality and necessity of identity politics in The Gambia

Never Again: The manifesto of an unlikely candidate Part 4