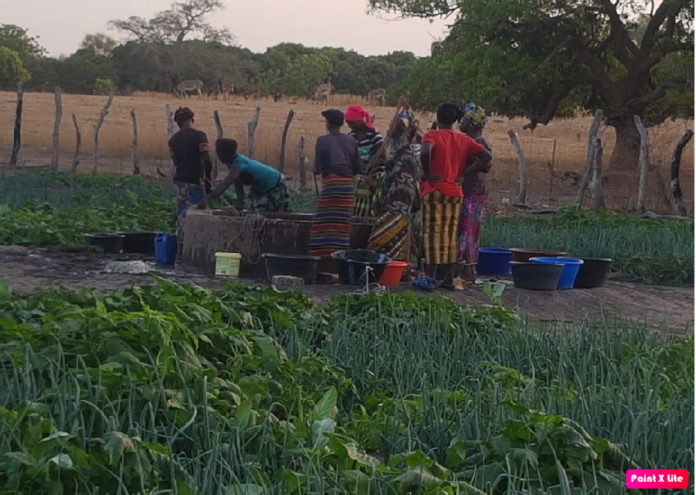 Women gardeners in Wuli Barrow Kunda in the Upper River Region have appealed for support from government, NGOs and philanthropists to help address their water problem.

Speaking recently during a visit by the officials of Beakanyang organisation, Mrs Kinti Sidibeh, lady president of the village lamented that lack of adequate water supply in the garden is affecting their production.

“We need a borehole because all the wells we having here do dry up and the other one that used to serve as the main source of water for us this years has also started to collapse,” she said.

According to her, other than the water scarcity at the garden they also need sturdy wires for perimeter fence.

“We have about 400 women in this garden but our faith is hanging this year due to this water problem we facing,” she further lamented.

According to Jarai Touray, vice president of Barrow Kunda Kambeng Kafo, they have written to various departments and projects and hope that their major problem of water could be address sooner rather than later.

Mrs Isatou Sanneh, the spokeswoman of the group made a personate appeal to Beakanyang to rehabilitate one of the wells they dug for them many years ago as a short-term solution.

“This garden over the years have been very helpful to us as a source of income and livelihoods,” he noted.

Mr Nfamara Jawneh, the executive director of Beakanyang applauded the women for their hard work while expressing solidary for their daily struggle to draw water from deep wells that are in bad state.

He reaffirmed Beakanyang’s commitment to empowering women and youth in the area while disclosing that they have recently opened a field office in Basse to bring them closer to communities they work with.

He encouraged the women to make best use of the opportunities being provided by their Basse office.

“We know very well that the women of this community and Gambian women in general are very hard working but lacks the necessary support,” he said.

Mr Jawneh said that apart from advocating for the human rights of women and youth and ensuring their meaningful participation in decision-making processes, the organization also supports small community projects to achieve their goal.

He urged the women in the community to remain united and continue their hard work to live a better life.

Jawneh noted that the quality of the produce at the garden could have been package to avoid or reduce post-harvest lost they are facing.

He promised that their concerns and appeals will be shared with the board of directors of his organisation for advice.

Share
Facebook
Twitter
Pinterest
WhatsApp
Previous articleFormer US presidential son-in-law is nominated for the Nobel Peace Prize over his role in Arab-Israeli normalisation
Next articleKarpowership gives out nearly half-a-million dalasis to orphanage, GMA
Join The Conversation