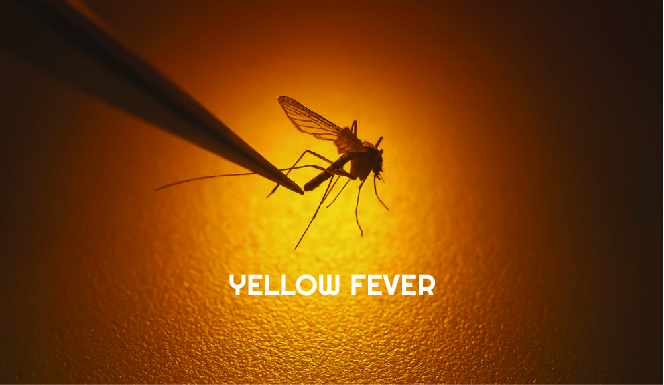 Key facts from the WHO:
· Yellow fever is an acute viral haemorrhagic disease transmitted by infected mosquitoes. The “yellow” in the name refers to the jaundice that affects some patients.
· Symptoms of yellow fever include fever, headache, jaundice, muscle pain, nausea, vomiting and fatigue.

· A small proportion of patients who contract the virus develop severe symptoms and approximately half of those die within 7 to 10 days.
· The virus is endemic in tropical areas of Africa and Central and South America.
· Large epidemics of yellow fever occur when infected people introduce the virus into heavily populated areas with high mosquito density and where most people have little or no immunity, due to lack of vaccination. In these conditions, infected mosquitoes of the Aedes aegypti species transmit the virus from person to person.

· Yellow fever is prevented by an extremely effective vaccine, which is safe and affordable. A single dose of yellow fever vaccine is sufficient to confer sustained immunity and life-long protection against yellow fever disease. A booster dose of the vaccine is not needed.
Before my first visit in The Gambia and Senegal, I had to be vaccinated against yellow fever. Before that I had never heard about the disease but I’m happy that there is a vaccine for it. There is another kind of disease which is spreading fear around the world, Covid-19 or the coronavirus against which we have no vaccine yet.

So many have been affected in one way or another, too many have died. Young people around the world fear for their lives and see no future. What should we tell them? How can we encourage them? First our youth spoke about nothing else but the environment, but now that topic seems to be forgotten. It doesn’t matter who I talk to, or which forum I turn to for information – the coronavirus is everywhere.

This virus is sneaky, it is hard to know which symptoms that belong to Covid-19 and which are just a common flu, or even allergy now, when spring has come here in Europe. During wintertime the trees and bushes are bare, there are no flowers anywhere to be found. When the nature wakes up, slowly but surely, there is a lot of pollen in the air. People get affected by that, their eyes become red and itchy, their noses are running and they keep on sneezing. It is difficult in these corona times to determine if the symptoms are only from an allergy or from the coronavirus. Allergic people fear to blow their noses so anyone else can hear, and sneezing in public will give you the death stare.

This new ”yellow fever”, Covid 19, comes from China and what has caused it? The speculations are plenty and we have still not heard the whole truth from those who have caused it. It took six days for the Chinese government to admit that the disease had spread from a town called Wuhan. They were forced to admit it when the first cases appeared in Thailand and the victims had been in China, in Wuhan. During these six days the Chinese government could have done a lot to prevent the virus from spreading as it did. They knew about the virus before, but they forbid their own scientists to speak openly about it. China claims to be the world’s largest democracy – which is pathetic!! Doctors, scientists and others with a lot of knowledge fear to inform those on higher positions about unpleasant discoveries.

In any society it should be a norm and an obligation to report every discovery that could affect the citizens. Those who actually were courageous enough to report about the coronavirus were punished and silenced. A virus of this sort, that spreads so fast and kills so many, could have been reduced in its progress if the Chinese government had taken its responsibility. The infection caused by the coronavirus is causing pneumonia and high fever. Some people have huge problem breathing and others are hardly affected at all. Why do I call it yellow fever? Because once upon a time, when we still were narrow-minded enough to judge people on the colour of their skin, the Chinese were called yellow – as well as Africans were called black and Europeans were called white.

I have been writing about the Chinese government before and how they are affecting people, not only in their own country but also abroad. Looking back at history the Chinese have been striving for world domination before. Some centuries ago China was poor, and had a population that was too large to handle. That is the reason why they implemented the one-child system I wrote about some time ago. Nowadays the Chinese economy is strong and the aim is to make it very much stronger with time. The Chinese are known for being patient, their plans for world domination is nothing that will be completed in just some years. No, they look long term and know well which cookie jar they can stick their fingers in next time.

There is a greed and a slyness that has seldom been seen. Not only does the Chinese government wish to control every move of their own people, but they wish to extend that control outside their borders. This can be done more or less visible, they know how to use both surveillance cameras as well as webcams. Today I read on the Swedish news that more and more large companies have decided to decrease their collaboration with Chinese companies. Some cities here in Sweden have had friendly relations with cities in China, but that will end. The Chinese government has tried to interfere in our politics, they have even threatened our citizens.

Have you heard about the expression, the elephant in the room? It can be used when there is a certain subject everyone tries to avoid. Why an elephant? Because you can’t avoid to notice it, but you don’t want to mention it as you fear that no else can see the same as you and they might think you are crazy.

Well, crazy or not, but I wonder why no one is openly speaking about the elephants…sorry, the Chinese intervention in The Gambia. I have been following the news from The Gambia, but the only critical voices I hear are on social media. How come? Don’t you know enough or do you fear to speak about them? Our current regime in The Gambia is dug head deep in debt and only God knows what kind of agreements they have done with the Chinese. Our government is not known for their transparency so I suppose they hope that no one will open their mouth and begin to question the so-called collaboration with the Chinese government.

Think about it for a while, don’t you find it scary? Search for information online and I can assure you that you will have some sleepless nights. China wishes to control The Gambia as it is controling so many other African countries. Democracy is not a word that is commonly used among representatives of the Chinese government. They are not interested in your opinions, wishes or welfare. They want your obedience and when they finally have invested enough in The Gambia, and made deals that will never be able to pay back, they have the rope around your neck and you are back in slavery again. Don’t allow the yellow fever to affect your mind, use it to be prepared and cautious.

Editor’s note: The comments in this article are the author’s and do not reflect the editorial views of The Standard.