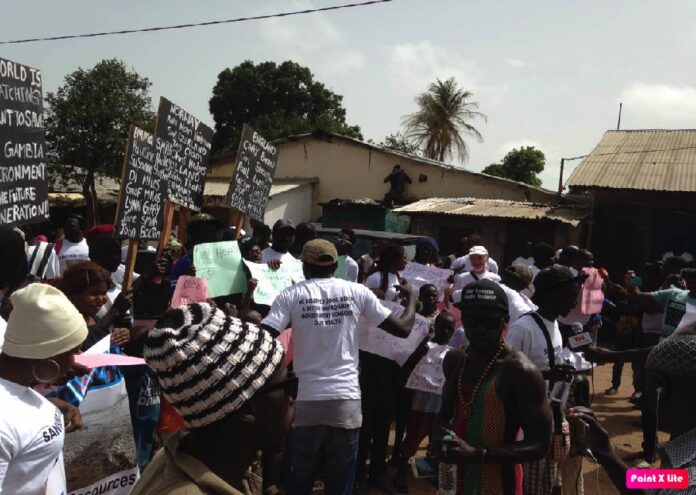 Police prosecutors yesterday pressed charges against 22 young people, all from the coastal village of Sanyang for allegedly setting fire to Sanyang police station.

Appearing before Principal Magistrate Isatou Dabo of the Brikama court, the accused were slammed with four counts bordering on conspiracy to commit a felony, arson, unlawful assembly and rioters demolishing structures.

When the charges were read to them, all the accused pleaded not guilty to all the four counts.

Police prosecution team, headed by Superintendent A S Manga, applied under section 62 of the Criminal Procedure Code to have the case transferred to Special Criminal Division of the High Court in Banjul, by virtue of the legal notice 1999, arguing that the court has no jurisdiction to try counts two and four, which punishment attracts life imprisonment.

“Your worship, we relied on section 208 of the CPC to have the accused persons remanded in prison pending their appearance at the High Court.”

In response, the head of the defence team, Lawyer Lamin S Camara, stated that the court has the jurisdiction to hear the case by virtue of section 5 subsection 2 of the CPC.

“The establishment of the Special Criminal Division doesn’t oust its jurisdiction to hear this case and legal notice can’t take away the jurisdiction of the court created by an Act of the National Assembly.”

On the issue of bail, counsel Camara said bail is a discretion of the court. He further reminded the court that bail has been granted in cases of arson and manslaughter. “It therefore is wrong for prosecution to say that bail can’t be granted for an offence attracting life imprisonment,” Camara argued.

At this point, the trial Magistrate Dabo adjourned the case to Wednesday for ruling on transfer of case and bail. The courtroom was full to capacity with family members of the accused persons, while a huge crowd stood outside the court waiting as PIU officers were deployed in riot gears.

Meanwhile, the police yesterday released a statement detailing the extent of the damages following the riot.

The full statement is reproduced, thus:

“The Police High Command wishes to inform the public that it has opened an investigation into the violent riot incident that occurred at Sanyang Village in Kombo South of West Coast Region on Monday 15th March 2021.

This unfortunate incident resulted in several acts of vandalism, attack and burning of the Police Station in Sanyang, burning and looting of a Fish Meal processing factory, burning of tires on roads as well as numerous acts of destruction to properties by rioters.

Preliminary assessment of properties damaged reveals that, 13 Fishing boats, 9 Boat engines , 5,273 Fishing nets were burnt and destroyed. Cash amount of about 8 Million Dalasis, 1 Million Five Hundred Thousand CFA, and Thirty- Four Thousand Chinese Renmini ( RMB 34,000) is suspected to be looted from the Nessim Fish Meal processing company and from individual residents. A total of four Motor Vehicles including two Pickups and two Mini Truck were also burnt down. Sanyang Police Station was attacked and the building burnt down including all records, Case exhibits , furniture and a Taxi Car parked at the station, was equally damaged.

Furthermore, homes of 5 individuals within the Village were attacked and their compounds and properties vandalised . A mobile shop was broken into and items estimated at Two Hundred and Fifty Seven Thousand Dalasis were all looted.

Further threats of violent attacks on foreign nationals within the coastal south areas led to the creation of a temporary shelter at Batokunku Village. The shelter is currently inhabited by over 250 people of various nationalities, mainly Senegalese. Security and relief is being provided for individuals at the shelter while efforts to reintegrate them into their communities are underway.

In view of the wanton destruction and looting of public and private properties by rioters contrary to the Laws of the Gambia, the Police High Command has initiated a thorough investigation into the incident on Thursday 19th March 2021 . The investigation led to the arrests of 50 individuals currently helping the Police in their investigations.

Twenty-Two individuals among the arrested people have been charged with offences under the criminal code including Arson, Rioters demolishing buildings, Rioters injuring buildings, Unlawful assembly and Conspiracy to commit felony. They will be arraign before the courts as soon as possible.

Meanwhile, investigations are in progress and members of the public are encouraged to come forward with information that may be useful to the investigations.

The GPF High Command reminds the public that , in as much as the law provides for citizens to express themselves, they must do so within the confines of the Law and in a peaceful manner.

The cooperation of the public during the investigations is highly solicited.”