48 blocks of cocaine seized from a food container 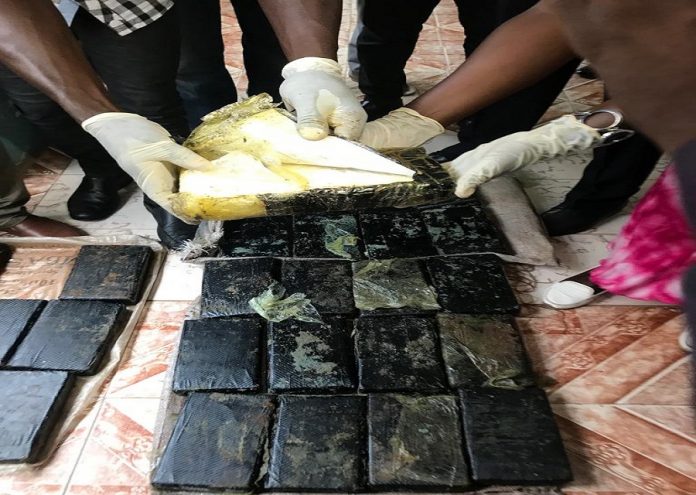 The Drug Law Enforcement Agency, The Gambia DLEAG has announced that its operatives have discovered 48 blocks of suspected cocaine in 20 bags in a container in Banjul recently.

The said cocaine is believed to be from Brazil and was allegedly shipped into the country by Mahdi Tajudinn and Ossama Mahmoud, a Gambian and a Lebanese respectively who were arrested and are helping narcotic officers in their investigations.

The DLEAG said the drug was allegedly addressed to Laura Food Company which deals in various types of
foodstuff since 2016.

The deputy spokesperson of DLEAG, Yassin A. Ndimballan told jounalsuts Thursday that the container was part of a consignment of 30x20ft containers of white crystal sugar ordered from Toyota Tsusho Sugar Trading Ltd based in the UK.

While offloading the sugar at a shop at Picton Street in Banjul, she
went on, the laborers discovered two loose bags containing 20 blocks and 6 blocks of what was suspected to be cocaine.

“The laborers then informed the buyer (Sid Ahmed) who also called the attention of the supplier (Mahdi Tajudinn, the Sales Manager of LFC). Mahdi then instructed Ahmed Ali, an employee of LFC to go and verify what was discovered and upon providing feedback, Mahdi came to the scene to see for himself,” Ndimballang said.

She further said having been shown the blocks, Mahdi instructed for the container to be escorted to their warehouse on Bond Road and and also informed his uncle, one Muhamed Nasser proprietor of Kairaba Shopping Center.

“Mr. Nasser then contacted one Muhamed Zeid (DAA) who advised them to contact DLEAG,” the NDLEAG spokesperson said.

She added that on arrival the operatives were shown the two bags containing 26
blocks of cocaine.

“A further search resulted in the discovery of two more bags containing 10 and 12 blocks of cocaine
respectively.

The NDEAG officer said her office is aware and will continue to work hard in the fight against drug traffickers who are beating even advanced technology in advanced countries.