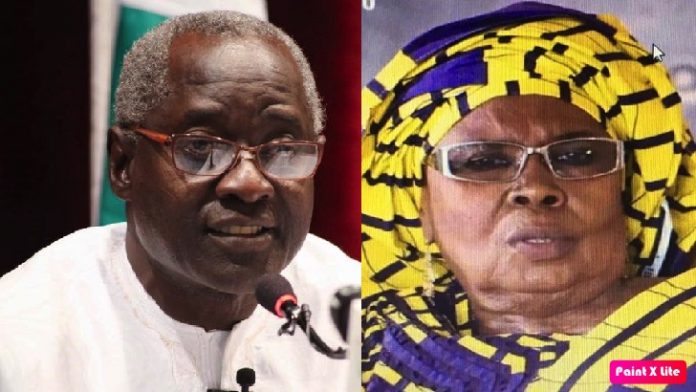 ‘’Reacting to critics who claimed  that the moment Darboe was released from jail, the Coalition began to crumble. Aji Yam Secka  said the former Vice President was not responsible for the disintegration of the Coalition. She argued that Darboe had even told Halifa Sallah and Sidia Jatta during the discussion on the tactical alliance that the UDP was not going to put candidates in Serrekunda and Wuli just to allow them to win. I am confident that if UDP had contested, we would have won. Let them be very sincere and thank Ousainu Darboe,” she added.

Since Yam Secka is the Deputy leader of the UDP, I would not accuse her of insincerity and malicious fabrication to cover up her inability to address the question posed by the journalist regarding the allegations of the critics who claim that his party leader is responsible for the disintegration of the Coalition.

The Journalist never mentioned Halifa Sallah or Sidia Jatta. Why did Yam Secka draw us into the conversation? Why did she pit us against Ousainu Darboe, warranting such comments that cannot leave him out even though he has said nothing?

Diversionary and digressionary tactics are the easiest way of evading questions to avoid dealing with and revealing unpleasant facts. It is very interesting that according to the reasoning of the Honourable Deputy leader of the UDP, it is Halifa Sallah who should show his honesty and sincerity by being thankful to Ousainu Darboe for his Parliamentary seat. One does not need high grade intelligence or common sense to see the irony. The impression Yam wants to give is that Darboe is generous to the PDOIS leadership, but they are not grateful.

I have to start revealing the facts so that the truth would become as clear as noon day.

A man was released from jail to become a Vice President through the laborious efforts of people like Halifa Sallah and now he, Halifa Sallah, should be thankful to such a man for his Parliamentary seat. This type of logic that Yam Secka has relied on to draw her conclusions is at best ridiculous and at worst fallacious. This is how history is written in the Gambia by people like Yam Secka .

In our culture, good deeds

become vain when told by the doer.

I will take that path with restraint by first recalling what I did when Ousainu Darboe and Yahya Jallow were detained under the pretext that a murder charge was not a bailable offence.  I will deal with the details if it ever becomes necessary. I will not mention what I did during the NADD period after the UDP pushed itself out of the political limelight in the Gambia by boycotting the 2002 National Assembly Elections. I have already challenged all NADD leaders to a debate to be hosted by KERR Fatou.

There is no sign that any leader has accepted to participate so far, other than my humble self. This is how invincible truth is. It is like the sun. No one could cover it with the palm of one’s hand.

It is unfortunate that Yam Secka is not Ousainu Darboe’ s wife, otherwise he would have been the one who would have received my calls like his wife did, as I moved from station to station, including the NIA headquarters, on the first day of his arrest to find out his place of detention.

Which UDP leader cared to

do that at that material time?

Yam Secka has easily forgotten the delegations I headed as Co -Chair of the Inter-Party Committee to visit the homes of the UDP detainees before their trial, with Dembo Bojang as the UDP representative,  at a time when no one dared to make such visits for fear of state persecution. The party leaders and representatives who participated in the exercise and the ambassadors who witnessed the efforts , are still alive to tell the story of solidarity without any appreciation from Yam Secka, an eye witness to all the initiatives.

It is very strange that Yam Secka would have the audacity to claim that the UDP owns the people of Serrekunda and Wuli and that UDP would have won the two seats if they put up  Candidates. In our view, any political party or leader who thinks that one owns the people is labouring under a delusion of grandeur.

Let us now look at the facts for people to determine for themselves whether Yam Secka is relying on fact or fiction to draw her conclusions.

First and foremost, it is the UDP, GMC and NRP who formed a Tactical Alliance in 2017.

PDOIS put up Candidates in 22 Constituencies and was not part of the Tactical Alliance.

Let me rely on the seats of the four PDOIS members of Parliament to drive my point home.

In Banjul North, PDOIS put up Ousman Sillah. UDP and GDC put up candidates. Two Independent Candidates also participated. Ousman Sillah won despite the Participation of the UDP and its Tactical Alliance . In fact, in Banjul where Yam Secka has her political base, UDP Participated in all three Constituencies and did not win  the seats.

In Wuli East, GMC put up a Candidate and was supported by the Tactical Alliance.

GMC and the Tactical Alliance had 577 Votes and Suwaebou Touray won with 2839.

In stating that UDP made Sidia to win, is  Yam Secka trying to tell us that they betrayed their own tactical alliance and gave underground support to  Sidia Jatta?

I would not want to think that the tactical Alliance was just formed in name and was characterised by back-stabbing in deed. We will wait for Yam Secka to give us the facts to clear our doubts regarding the true state of the UDP GMC and  NRP Tactical Alliance in the 2017 National Assembly Elections.

In Serrekunda, I went from compound to compound and the message was uniform:

We must pay you for the sacrifice that brought about the peaceful transfer of political power in the Gambia.”

I am convinced that people in Serrekunda voted for me because they were convinced that I deserve their votes. If Yam Secka has statistics to prove the contrary I will concede.

Do I have statistics to prove her wrong?

Elections in the Constituencies I stood as a candidate since 1997 have shown that in parliamentary elections, I have not been a march to the UDP Candidates ? In 1997 the UDP, which had the support of the PPP, NCP and  GPP Alliance,  put up a candidate against me as the PDOIS Candidate for Serrekunda East . Without any support of an Alliance, I had more votes than the UDP Candidate. In 2002, UDP boycotted the Elections and called on its supporters to abstain from voting, I won the seat . The people proved that they were not owned by any political party. In 2005, there was a by elections with the support of the NADD Coalition, I again won the seat. In 2007 Parliamentary Election, UDP put up a candidate in  Serrekunda Central and I had more votes than their Candidate despite the post NADD political conspiracies against me which only made it worse for the opposition, compelling us to settle difference and moved towards new alliances without malice.

Instead of thanking those who have been engaged in damage control to keep the opposition alive in the Gambia for 22 years, Yam Secka is trying to push them into obscurity.

PDOIS has never been and will never be at the fringes of Gambian politics. PDOIS played a major role in patching up alliances and coalitions up to the point of bringing about the change which has enabled political leaders to move from the cells of prisons to occupy the highest positions of this land. If members of their leadership are not generous and humble enough to thank PDOIS, at least, they should not try to undermine the integrity of the party and its leaders.

Contrary to the image that some members of  the UDP leadership try to give of PDOIS  antagonism to their party,  in working with their grassroots during alliances and coalitions, the PDOIS leadership have enjoyed tremendous respect to the point of being able to drive vehicles right in the middle of UDP convoys with loud utterances of appreciation from their supporters.

“Some are not comfortable with this. They prefer antagonism to peaceful co- existence, to drug their membership with hatred and spite.”

We had hoped that the UDP leadership would curb the derogatory overtones from those on top so that we would compete for leadership with full adherence to the virtues of decency and sobriety.

“In the avoidance of doubt, I would take this opportunity to call for a joint Two hour- Zoom Press Conference with Yam Secka or any member of the UDP leadership to clear matters regarding Tactical Alliance and Coalition 2016 in general.”

Letters: Let’s not play with fire!