A nation of three or five years! 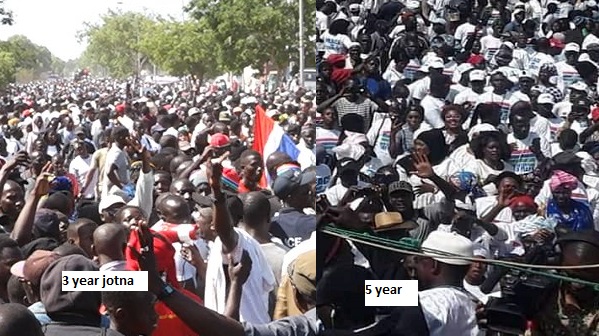 As Gambians spend hours and hours arguing about who has the larger crowd between people who cannot agree on the span of the rule of President Adama Barrow, majority of the population, who like me, are suffering immensely due to poor transport system and arrangement. Sadly, it is not only about the suffering of the people but also about the millions that the state loses because of this unfortunate problem.

In many African countries which have visionary leaders, governments are working assiduously to solve the transport problem as they don’t only see it as a favour for the ease of the citizens’ going and coming, but as a way of maximizing the use of time, which is a very fleeting commodity. Back home, we are stuck in the 19th Century transport system.
Whether this problem is entirely that of the leadership and government, the blunt answer is YES. Poor leadership is killing this country slowly. Politicians ignore the needs of the people and seek to always divert the attention of the masses to things that are of little or no consequence to them and their lives. When the people complain they will come up with the-now-monotonous ‘plans are at an advanced stage to resolve these issues’.

Many months and perhaps years later, the problem would still be there and you would wonder how advanced was the stage of those plans earlier publicized. It is like deceiving your crying child with the words “Please keep quiet and I’ll buy you mint.”
The child keeps quiet and as s/he is too young and has a very short memory span, they soon forget about your promise. This, and it is in itself a problem, is an epitome of what is wrong with our society (but that is a topic for another day). So, they get away with it every time.

I’ve used the transport system and its attendant problems only as an example but there is hardly a sector in this country that is working up to expectation. The government seems to have been taken along in President Barrow’s bus – or is it the horse – which sees only one thing: his entrenchment into power and not relenting.

If you ask me, it is not that Government is incapable of resolving this problem; it is rather a lack of political will to solve it. Just take an example of the protest organized by the Gambia for Five Years! They were able to mobilize and ferry people from all regions of the country just because it may lend credence to the belief that Gambians want Adama Barrow to serve for five years.

They will put it out that the Government had nothing to do with this protest but come on! “Suwo kuu ta waati juma go nte ñoo suuteele? We all know that they did everything to surpass the Three Years Jotna in numbers.

Gambians will buy into this because many, if not most, are wallowing in political ignorance and lack of political advancement. This is due to the miseducation we have been fed since independence by succeeding governments.

What the Gambia needs is a course in political awareness and this course should be attended by all including the president and his ministers, the teachers, students, farmers and even PhD holders, trust me it is not farfetched.

With the peak time struggle both in the morning and in the evening, a deployment of five to six buses from GTSC would have solved this problem within a short time. But again, where are the GTSC buses?
Ask me another!