The Standard
32.1 C
City of Banjul

‘Absence of UDP and PDOIS will not invalidate Barrow’s Mandate’ 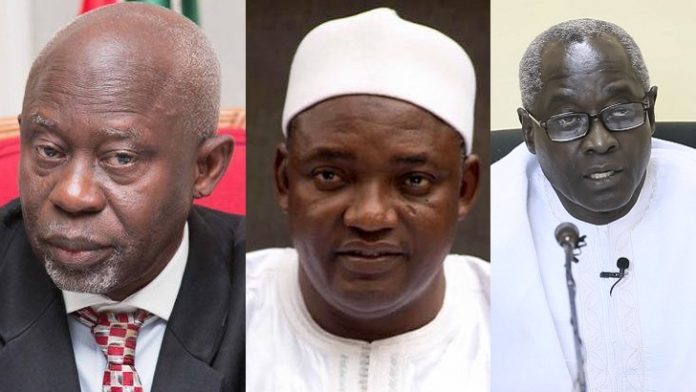 Essa Dampha, a political aide to President Barrow and chairman of West Coast Region’s coalition media team, has said that the absence of PDOIS and UDP from Friday’s declaration extending Barrow’s mandate will not invalidate that decision.

The two parties are believed to have been the biggest players in the creation of Coalition 2016 but both have for one reason or the other not participated in the recent Coalition talks to amend the MoU.

While PDOIS had said the spirit and principles of the MoU have long been violated, the UDP wanted the initial MoU signed first before any amendments can be made.

But speaking to The Standard yesterday, Mr Dampha said as a person, he has aligned himself to the position of Madame Tambajang and the coalition members who went to State House.

He further claimed that the members of the coalition who extended the president’s ‘social legitimacy’ are the majority.

The issue of a party being the biggest in the coalition is not valid.

All the coalition parties are equal because they all provided 70 delegates. And the number that extended the president’s social mandate is bigger,” Dampha said.

He said what people should realise is that only 43 percent of the electorate voted for the Coalition in 2016.

“So that’s not even the majority of the voters. The APRC and GDC supporters put together are more and those people are not agitating for the 3 years.

So now, opinion is divided over the matter even within Coalition’s 43 percent. But it is clear that the majority of Gambians would rather prefer Barrow to complete his 5 years,” Dampha argued.

Asked if he is not bothered about the outcry following the announcement, Dampha said people will always have their say and opinion on all matters all of which are beauties of democracy.

“No one can stop anybody from expressing his or her views; that is no longer possible,” he noted.

Dampha said if any party feels it is the biggest let them wait until the next election to prove that.

Responding to criticism that President Barrow is undermining trust in himself by going against his own promise, Dampha said the only trust between the people of The Gambia and President Barrow is for him to work for 5 years as stipulated in the constitution.