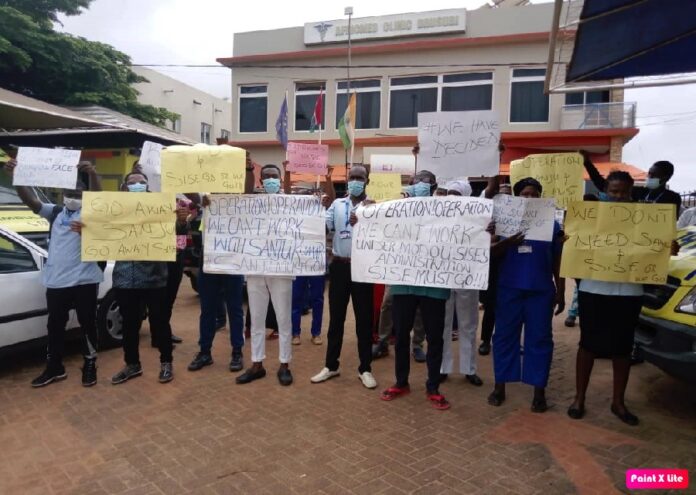 Staff of Africmed few days ago protested outside the clinic demanding the resignation of some top officials after the clinic allegedly cut their salaries by 25%.

“In its quest to show compassion to staff during these trying times and financial challenges for individuals as well as business entities including Africmed, the management did its best to avoid laying off staff even though there were some whose contracts were due to expire or have expired.

“Mainly for this reason, the management made a collective decision to temporarily cut all staff salaries including the management by 25% for the next five (5) months (August to December 2020) and made the commitment to start to repay the 25 cuts in January of 2021. After this collective decision was made, a memo to this effect was written and given to all staff soliciting their support, understanding and acceptance.

The deductions were effected on the August salaries as stated above and this sparked anger among some staff members. When management became aware of the aggressive reaction to this decision amongst some staff, message was communicated to all staff that the 25% that was deducted can be collected from the finance office with immediate effect. However, the disgruntled staff continued to mobilize and staged protest to make demands not related or relevant to the 25% cut.

“The CEO had personally approached the disgruntled individuals and asked them to meet him in his office on the morning of the incident when he became aware of it, but they declined. The Head of Nursing similarly tried to engage them without success. The management was baffled as to why Social media was involved; what was the motive?”