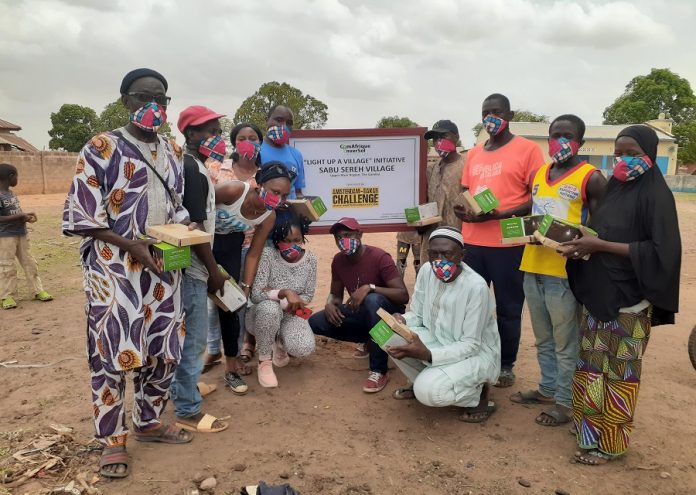 Amsterdam-Dakar Challenge and ComAfrique InverSol Initiative (CII), have recently provided 70 Intelizon LED solar lights with backup mobile chargers to Sabu Sereh Village, Upper River Region, The Gambia under its “light up a village” program.
Sabu Sereh is the 200th village that Comafrique has implemented with their “light up a village program”. The program commenced on 8th January 2010 with Jakoi Sibrik in the West Coast Region.

To date, the program has completed 79 villages in The Gambia and 121 villages in Guinea-Bissau with 10,477 total lights distributed impacting a population of more than 105,000 people. The program has allowed economic activity after dark, helped children study, increase social interaction, provided communities with safety and security and most of all have created health benefits of not using the candle. A calculation model assuming that the light replaces 1 candle has yielded a saving of more than 19.50 Million candles in the last 11 years of the program’s existence. The program also provided 200 solar lights to primary rural health centres that have benefitted the medical staff and patients in those centres.

At Sabu Sereh village implementation, Alkalo of the village Mr Kalipha Jarra, thanked Amsterdam Dakar Challenge and ComAfrique InverSol Initiative for providing them with the solar lights that will help the village conduct economic activity after dark and have village meetings and other community activities late in the evening. He urged the beneficiaries to make the contribution regularly for the lights and keep the program sustainable.
VDC Chairman Nfamara Demba mentioned that “since we all know there is no electricity in our area yet, these lights will save us from buying candles and give us better light; most of all save us from fire accidents and prevent health hazard.”

Sabu Sereh ZonLight Committee (SSZC) has been formed with Mr Muhamed Krubally – President, Mrs Penda Keita – Secretary, Mr Lama Jallow – Asst. Secretary, Ebraima Jallow– Cahier Isatou Jallow member. This Committee will be responsible for the management and maintenance of the solar lights and will ensure the sustainability of the program.
All the 70 solar lights have been donated to SSZC which in turn leased them to the beneficiaries who have agreed to pay a contribution of GMD2 per day per light. This contribution will be collected and managed by SSZC and is called the Sabu Sereh ZonLight Fund.

Her Excellency Henriette Sonko, Consul General of Holland to The Gambia who is also a patron of the ‘light up a village program’ in her message conveyed her appreciation of the Amsterdam Dakar Challenge for sponsoring their 11th village in the Gambia. She again reiterated the need for the village to take responsibility of the solar lights and the program’s sustainability.

Sabu Sereh village ZonLight Fund will be used to replace solar light batteries every 2 – 3 years and replace the LED solar lights after 6 years. Every 6 years, the BZC will have a surplus fund from the fund that can be used for any development activity decided by the village.