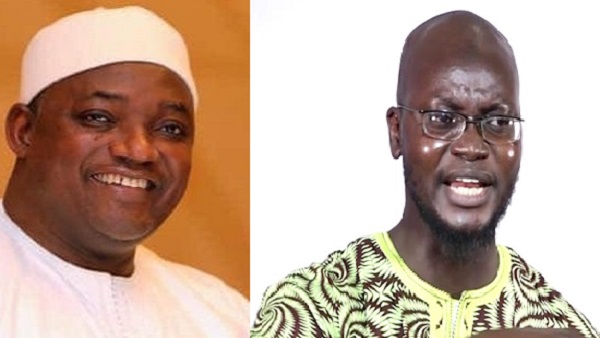 The deputy spokesperson of the Alliance for Patriotic Reorientation and Construction has confirmed that President Barrow’s National People’s Party is pushing to get his party into a coalition ahead of the 2021 presidential election, but an agreement has not been reached so far.

“I can confirm to you that we are discussing with the NPP and three other political parties – but we have not reached an agreement with anyone of them just yet. But any agreement we are going into will be in the interest of the Gambian people,” Dodou Jah told The Standard in an exclusive interview yesterday.

Speaking specifically on the talks with the NPP, Jah was quick to acknowledge that the former ruling party “will not go into any agreement with NPP unless President Adama Barrow fulfils the constitutional guarantee of giving Yahya Jammeh his dues as an ex-president and return all seized APRC assets.”

“I don’t know about other political parties but for NPP, we will not go into any agreement with them if they fail to give Jammeh his rights as a former head of state. That cannot be comprised. We are not going to have an agreement with somebody who doesn’t respect the law,” he said.

He said for any coalition between the APRC and the NPP, the government will have to implement the joint agreement between AU, UN and Ecowas before Jammeh left for exile.
“It is also our belief that the Barrow administration should reconsider their implementation of the Janneh Commission recommendations. It is illegal and should not be tolerated in a democracy,” he added.

Jah said these conditions will not apply if they are discussing an alliance with other political parties.
“We are aware that the NPP’s main target is the APRC. They want to paralyse the party. They are desperate. This is why they are engaged in the politics of deception. People like Seedy Njie are going around the Fonis telling people to join the NPP but we want to tell him that the APRC is untouchable especially in the Fonis,” he said.

Jah however expressed disappointment over the NPP’s refusal to adhere to the regulations of the state of public emergency.
“They should have set an example but unfortunately they are engaged in politics disregarding all regulations as if nothing is happening,” he added.

Meanwhile the APRC Member for Foni Berefet, Sankung Jammeh also told The Standard in an exclusive interview that a coalition with NPP is a possibility if President Barrow accedes to the demand for the unconditional return of ex-president Jammeh.

He added that the return of the exiled former president was the top item on the agenda when the party’s interim leader, Fabakary Tombong Jatta, and other party officials met President Barrow at the presidency sometime last year.

“It was during this visit when our leader, Mr Jatta, put forward the party’s demand for the return of Jammeh, the party’s assets and account. But this meeting is not recent as people are speculating and since then, we are waiting for Barrow to reply to these demands,” he revealed.

The Foni legislator confirmed that emphasis was placed on the return of Jammeh before the election during the APRC’s conclave with President Barrow, adding that once this has been fulfilled the APRC would throw its weight behind Barrow to see him sail through in the next presidential election.

The Berefet NAM said during the meeting, President Barrow only said he will look at them [demands] and get back to them without giving any specific timeframe.
He said the APRC is not a political foe to President Barrow as the party is alive to the fact that no single person can rule for eternity, explaining that politics is about give and take and that the return of Jammeh is the overriding interest of the APRC party.

“APRC did not feel jealous of Barrow being the president but since politics is about interest and he needs us to do something for him, we also put forward our interest. We are listening to him. We are only looking forward to seeing him allow Jammeh to return home before the coming election,” the Foni Berefet representative noted.