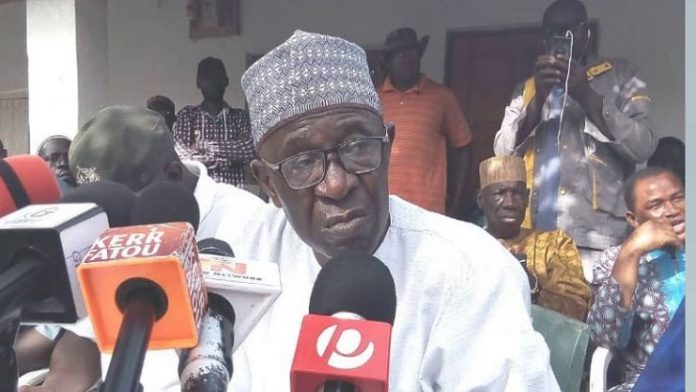 Opposition APRC party has remonstrated with Attorney General Abubacarr Tambadou to urgently resign from cabinet to save President Adama Barrow’s image.
Party leader Fabakary Tombong Jatta told a press conference last evening: “I am calling on Baa Tambadou to resign immediately. He is a threat to The Gambia and the peaceful co-existence of Gambians. The government is in all these mess thanks to him as the legal adviser to the president. His continuous legal blunders are increasingly making President Barrow unpopular among Gambians and around the world. Barrow is losing respect all because of him. The sale of Jammeh’s assets is nothing but a deliberate looting of Gambian assets by vicious forces only motivated by the accumulation of wealth.

“Tambadou has failed this country. His behaviour doesn’t commensurate with his position as attorney general. He portrays himself as a human rights defender but he continues to be the biggest human rights violator. He cannot call anyone criminal. The issue of the [diplomatic] passport scandal has clearly demonstrated that he is not practicing what he preaches,” he said.

Jatta said Mr Tambadou is driven by “a personal agenda” against his party.
He demanded the government to tell Gambians what they did with the 7,000 heads of cattle officially confiscated from Jammeh not the slightly over 700 heads of cattle they reported.

He alleged that the person appointed by the courts as receiver for Jammeh’s cattle was replaced by Mr Tambadou with one Mr Barry.
“We believe millions [of dalasis] of Jammeh’s properties have not been accounted for by the Barrow administration. Millions [of dalasis] of Jammeh’s assets have been put under the carpet. To ensure transparency and accountability, we demand Minister Tambadou tell Gambians how many vehicles and heads of cattle were seized and sold and where the monies are,” he said.

Return of sold assets
The opposition APRC leader said “now that the appeal court has ruled that the Janneh Commission’s recommendations cannot be enforced or executed, the government should return the divested properties to their [original] owners with immediate effect”. He said the appeal court’s ruling is the biggest body blow to the Barrow administration.

Resignation of IEC head
The APRC also demanded the resignation of Alieu Momarr Njai and the “appointment of a new and God-fearing chairman” of the Independent Electoral Commission “to ensure transparency and accountable elections”.
Mr Jatta said his party has “no interest in causing any instability in the country but would not allow anybody to intimidate them for no just cause”.
The former ruling party also queried the actions of activist Madi Jobarteh, saying he has been “unjustly” critical of the party.

Jammeh’s return
Jatta said he was sending a “special request” to President Adama Barrow, to allow former president Jammeh to return to the country “even if it will mean him facing justice”.
“Nobody should attempt to stop a Gambian from returning to the country despite whatever crimes the person committed. We have protested and demanded for his return. We are still requesting for the government to heed our call and grant our request. Let them allow him to come back because he wants to come back,” Mr Jatta said.