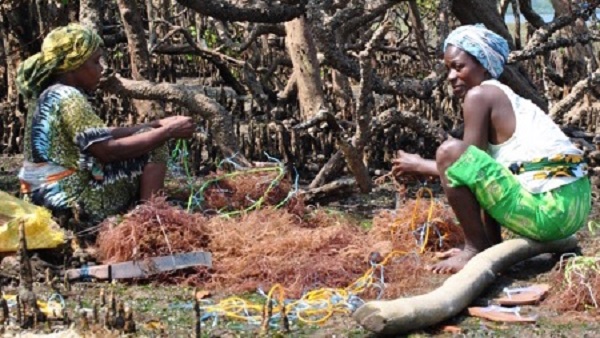 Dozens of Kenyan and Gambian villagers will soon become seaweed farmers as part of an ambitious project that is bringing sustainable aquaculture to two countries that need environmental and economic support.

The vision behind the project comes from two graduate students who have received a one-year, $150,000 grant to support their goal of creating environmentally sound seaweed and sea cucumber farms on the coasts of Kenya and The Gambia.

Patrick Cage and Maxwell Azali, both first-year masters’ students in the Costal Science and Policy program, teamed up on a proposal to the Bridge Collaborative, a partnership founded in 2016 by The Nature Conservancy, Duke University, International Food Policy Research Institute, and PATH, that supports efforts to deliver more integrated solutions that benefit people and nature.

Cage and Azali’s project is one of only four proposals that were funded by the collaborative’s Bridge Spark Fund.
Part of the beauty of the project is that it advances sustainable aquaculture and employment opportunities in ways that Cage and Azali hope will be “scalable” to other parts of Africa and beyond.

“We’re looking at creating multiple new income streams that are diverse and resilient and sustainable over time,” said Cage, who will direct the overall project.
Azali, who is from Kenya, is a fisheries expert who will conduct environmental monitoring and quantitative analysis.

Seaweed is farmed in shallow coastal waters, where it is tied to ropes that are attached to stakes; tending and harvesting takes place at low tide. It is a low-tech, low-capital endeavor with a soft environmental impact. “It doesn’t use fertilisers or freshwater or any of the agricultural chemicals that are ubiquitous around the world,” said Cage. “It doesn’t cause erosion, and seaweed actually marginally improves water quality.”

Sea cucumbers, soft-bodied animals that look like cucumbers and are also called sandfish, feed by sifting sand on the ocean floor. They are farmed in “pens” to protect them from predators like crabs. Both products are farmed for export; seaweed is used to make thickeners used in toothpaste and other products, and is also sold as higher-value food products. Dried sea cucumbers are a popular food item in China and elsewhere, but they have been “heavily overfished” in Kenya, said Azali, adding, “The wild population is at risk, it is vulnerable.”

Sustainability is at the core of both farming projects, and Cage and Azali will introduce “green” practices at every step.

For example, seaweed farming is somewhat established in Kenya, but variables of water temperature, light, and nutrient levels make it challenging. The farms also attract small herbivorous fish, like rabbit fish, which can be harvested by local fishermen. To mitigate potential negative impacts, Azali plans to introduce a modified basket trap with an “escape gate” that will allow juvenile fish to grow to adulthood.

Cage and Azali are collaborating with the Kenya Marine and Fisheries Research Institute, the Gaining Research Experience in Africa for Tomorrow (GREAT) Institute in The Gambia, and Sustainable Ocean Alliance.

“Aquaculture intervention is about finding communities that are excited about new livelihood options, and engaging the community around their interests,” said Cage. “It includes hands-on training in growing, processing, and selling the product. One of the promises of aquaculture is to give people a predictable source of income over time.”
Cage and Azali are focusing their efforts on three villages in Kenya and two in The Gambia, where seaweed and sandfish farming are novel approaches.

The Gambia is one of the least-developed countries in the world, according to the United Nations, and the villages in Kenya where the project will take root are small and undeveloped.

About 40 households will participate, greatly expanding opportunities for residents who rely on subsistence farming, fishing, and, for some, tourism, which has dropped significantly in recent years. Importantly, seaweed farms will provide an income stream for women, who typically manage and tend the farms.

The project’s support will extend beyond harvest to marketing and the creation of business cooperatives, said Cage, who leaves for Africa in early March and expects to spend most of the year there. Azali will spend 2-3 weeks in Kenya in March.
Success will be measured by a host of environmental indicators over time and the impacts on households: employment and income, as well as health, nutrition, and access to education.

In their application for funding, Cage and Azali also emphasised the “scalability” of their proposal. “This is a pilot project,” said Cage. “Part of defining success is asking if this is a viable model for other parts of Kenya, The Gambia, other African countries, and around the world.”

Azali was working with the Wildlife Conservation Society (WCS) in Kenya as a fisheries researcher when he was introduced to the CSP program. WCS partners with CSP and is underwriting part of Azali’s participation in the two-year graduate program, with support from the Beinecke African Conservation Scholarship.

Cage was a climate policy professional when he learned of the CSP program from director Anne Kapuscinski, whom he met when both were attending the Global Climate Action Summit in San Francisco in 2018.

“Patrick and Maxwell are leading the way toward the kinds of transformational change we need in the world today,” said Kapuscinski. “As individuals, they are bridging the developed and developing world, and they’ve forged a strong partnership that taps their expertise and their on-the-ground connections. This is a uniquely powerful project.”