Are you willing to serve and to contribute? 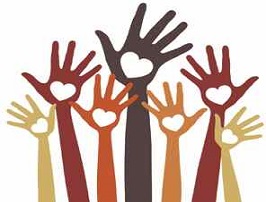 The other day I was listening to a podcast of an interview with Susan Shabangu, Minister of Social Development in South Africa (a podcast is a radio programme that is online and you can listen to it whenever you wish).

The interview was so interesting so I had to listen to it several times, I even wrote notes so I would remember the best part of it. Susan Shabangu is a very fascinating woman. She served as Minister of Social Development, having previously served as Minister of Women in the Presidency. She also serves both in the National Working Committee and the NEC of the ANC. Born in 1956, Ms Shabangu has a long history in struggle politics. She organised the Amalgamated Black Worker’s Project in 1984 and went on to head the women’s desk at Cosatu. She was an advisor to the September Commission, assigned to look at the future of the unions in the mid-90s and later became a Member of Parliament. She has actively participated in parliamentary committees such as Labour, Transport and Trade and Industry during her tenure.

Another question from Susan Shabangu is: “Are you willing to listen?”
For a people who still struggle with the aftermath of slavery and oppression the word ”serve” or ”servant” has another meaning than for most of us. It is about the loss of freedom and free thought, it is about being forced to labour you haven’t chosen to do and that will never pay. Looking forward, and placing the term in another context, serving and being a servant is an honorary task. Someone has given you the confidence to be a servant, you have an important task because people have put their trust in you.

Listening actively is one way of serving our fellow human beings, both as simple and hard as that. Living in a society where you are more or less constantly surrounded by people can make it hard to have a conversation in peace and quiet, but if there is a will, there is a way. Keep eye contact, ignore your phone while you speak with someone and think before you give a reply. This last part is really important because you don’t need to have an answer ready in an instant. If you don’t know what to say, then say that. Ask if you can get back to the subject when you have thought about it for a while. As long as it is not a matter of someone asking you for a bucket when their house is on fire, it is most often possible to wait a little. This also means that you are respecting the other person, that you take the subject seriously. Ignoring the phone can be hard, but I am sure I’m not the only one who gets irritated when a conversation is constantly interrupted by phone calls. If the call is about something serious you can take it, but if you see the number of a friend who can be chatting ”forever” the call can wait. Not many of us are so important that it is a matter of life and death if someone can’t reach us instantly, we or they can always call back.

The third thing I wish to tell you about Susan Shabangu is what she kept on telling herself: ”Be humble.”
Be humble should not be confused with being submissive. There comes ”massas” whip again and there is no use for it anymore. Being humble means that you are aware of your value, but you don’t need to rub it in someone’s face. It also means that you treat others as you wish to be treated yourself. Being aware of how important all of us are, that all of us has a role to play in our society, is to be humble. Some people who believe that they are so much more important than anyone else, and therefore need to be treated differently, need to eat a piece of the ”humble pie”. If you ever have seen a jigsaw puzzle you know that every piece of the puzzle has its own place. They don’t fit anywhere else, and their right place can sometimes be hard to find, but it is there. The puzzle is not complete if not all the pieces have found their own place, and it doesn’t matter if it is number 457 of the 689 light blue pieces that will become the sky on the puzzle. You might think that the pieces that form the palace or the beautiful views would manage without the sky, but all pieces matter.

Being willing to serve, listen and being humble are the most valuable characteristics in any human being. These characteristics are also the most valuable for Muslims everywhere in the world. It doesn’t help how many times a day we pray, how much charity we give during Ramadan or any other time of the year, if we don’t do it with a pure heart. Fasting only becomes like a voluntary starvation if we do it for the show. Do we really believe that the angels are asking for an audience when we do something good? Will our place in Jannah become better, the angels will be cheering when they see us standing before God, hoping to enter? Will the angels be chanting encouraging songs, like at a football game, when they see that someone who has given a lot in charity is waiting for his or her entrance? If so, then what will happen to the poor widow who only had a cup of rice to give? What will happen to the poor beggar who was killed accidentally by a speeding car? That beggar who was living far away from his family, they didn’t even know about his death until many months after. Will these people be let in to Jannah, but they need to use the back door because the main entrance is only for the generous?
We all know what the Holy Qur’an tells us, but still we behave like children. We constantly search for praise from others, we misbehave when we believe no one can see us. We lie and we cheat, we act in a way we would never allow our children to behave. Thank God that God is not as fast with his punishments as we can be.

God doesn’t whip us with a belt or hit us wherever he can reach us. I have written about a similar topic before, said that we need role models in our society. It would be great if I never had to get back to that subject again, but as with misbehaving children their parents keep on telling them the same things over and over again. We do it as parents, with the hope that sometimes there will be a change for the better. We must keep on doing it even among us adults as long as we can see that someone is misbehaving. Arguing with adults doesn’t end with a belt whipping or slaps in the face (hopefully!) but sometimes we need to correct someone.
There is a difference between destructive and constructive criticism. You can almost hear, without an explanation, the difference between these two. Finger pointing, nagging, back biting, slamming someone on social media are some examples of destructive criticism. You spew out your anger without any thought of how that will affect the other part. This kind of criticism is mostly performed on a distance. You don’t want to see the other person, maybe you don’t have access to the other part either, but it doesn’t matter for you as long as you can speak your mind. We live in a democracy, right? Aren’t we allowed to say anything we wish? No, we are not allowed to say exactly anything we wish. We can have any kind of opinions we like, as long as we keep them to ourselves . The thing with a democracy is that it comes with a responsibility. We are never, ever allowed to hurt each other because that is not democracy – that is anarchy.

A society doesn’t function if not all citizens are willing to serve and to contribute. ”A chain is never stronger as its weakest link”, so the more weak links we have, the weaker becomes our society. All of us can contribute in our different ways, all of us have gifts that we can use.

What gifts? Well, it’s not like you came to the earth, wrapped in gift paper, but you and the things you can do are a gift in itself. We have different talents, some are excellent singers, others can cook the most delicious chicken yassa in the world. Some of us have studied for many years, others haven’t been able to afford more than some years of education. Ms Susan Shabangu studied up to high school level and then she got absorbed by the politics. Today she is a member of the parliament in South Africa, a committed and intelligent woman who got her position thanks to her will to serve and contribute.
Ms Shabangu has been working as a politician for many years, when she began her career the political play looked different. Nowadays we need to ask for much more of our political leaders than maybe 40 years ago.

These times require different qualifications than before, the demands are higher so we must do our best to rise to the occasion. If all of us decide to do our best for our society it will not only benefit everyone else, but in the end ourselves. What is good for others is also good for us. Good education, healthcare, infrastructure, water supply, Internet, agriculture – you name it. All of us can contribute if there is a will. All of us can serve and we should take it as an honorary task. The problem still remains; if our leaders are not willing to serve and contribute, they send the wrong signals down the lines. There seems to be some kind of misunderstanding at the top. Do they know they will roll down the hill one day, because they can’t stay there forever? 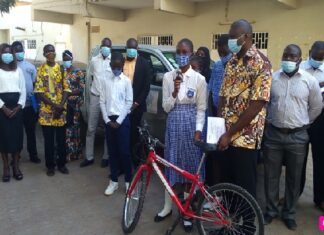 March 5, 2021
The Catholic Development Office (Caritas Gambia) through their partner the Rotary Ireland last week distributed 300 bicycles to 13 schools in the West Coast...