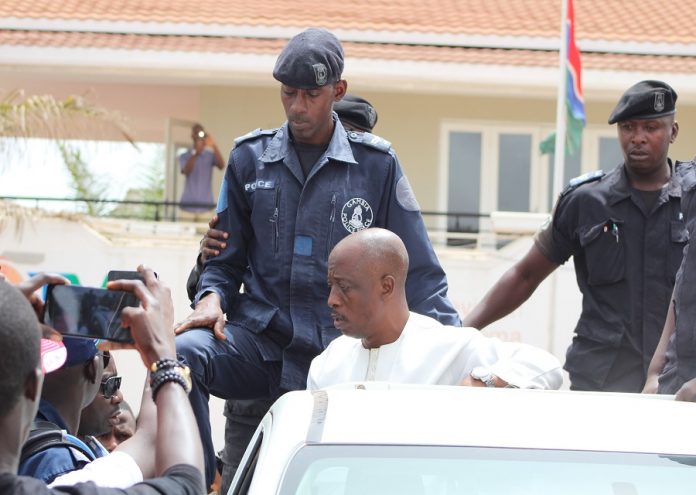 Former AFPRC member Yankuba Touray, implicated in multiple alleged crimes including the slaying of fellow minister Ousman Koro Ceesay, is being detained at an unknown location for his safety after his dramatic arrest at the commission yesterday.

This followed a push and pull between him and lead counsel Essa Faal, who wanted him to account for his alleged role in the 22 years of tyranny in which he participated as one of the pioneers.

Touray finally agreed to appear but flatly refused to say anything beyond his educational and military career before the 1994, the year he and four others dislodged the PPP government to impose a dictatorship.

‘You can use all your legal tools, I am not going to testify because under the current constitution I am covered by immunity as member of the AFPRC,” he told the counsel, and with that, he stormed out.

He was instantly arrested and a mobile circus started going along with him as he was escorted to the Kairaba Police Station.

The crowd overwhelmed the police who had to spray tear gas to disperse the crowd who started violently throwing stones at the police van carrying Mr Touray to a secret location.

A woman, who reportedly said provocative words in sympathy with Mr Touray, was chased and attacked by the crowd before being rescued by some other bystanders.

The incident posed the first challenge to TRRC which convened an impromptu press conference to answer questions about the matter.

The lead counsel maintained that the issue of TRRC is not a court but it has powers to act on any act of contempt towards it but warned against any mob justice, assuring the nation that the law will take its course.

Commission Chairman Dr Lamin Sise summed up the matter with this: “Touray has been informed on several occasions that failure to respect a subpoena issued by the TRRC constitutes a contempt of court and is therefore liable to be referred to the High Court for prosecution.

In the light of this, the commission has to act firmly and within the parameters of the law to ensure that actions of this nature are dealt with the full force of the law.

“I therefore have no choice but to order the immediate arrest of Mr. Yankuba Touray pursuant to section 15 (1) (h) and 15 (2) (b) of the TRRC Act 2017 and to hand him over forthwith to the police station that has jurisdiction over offences within this area and a referral be submitted as soon as possible to the Attorney-General’s Chambers for prosecution of Mr. Yankuba Touray”.

The incident also sparked outrage among Gambians around the globe who described Mr Touray as arrogant and rude.

However, a small number believe he may have valid points about the constitution providing the AFPRC with immunity.

Others countered to say the crimes investigated by the TRRC are likely war crimes for where there is no immunity anywhere in the world.

Meanwhile, the commission has wrapped up the current session until July 8 when the 6th session will start.