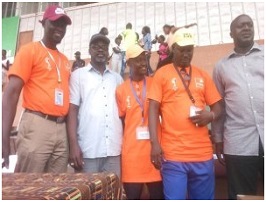 The curtains have been drawn in this year’s edtion of the GTBank Principals’ Cup held at the Independence Stadium in Bakau over the weekend.

Thirty Two (32) schools from both the Upper and Senior Secondary Schools took part in the week long football fiesta sponsored by the Guaranty Trust Bank in partnership with the Gambia Football Federation.

In the female category, defending champions Gambia Senior secondary school were denied a back to back win by the new kids on the terrain Bottrop Senior Secondary school in the early kickoff at 3pm after a one all full time draw ended in post match shootouts.

Almost all players on either side scored their goals in the drama without a winner.

The shootout continued and ended 9-8 for Bottrop which eventually helped goalkeeper Amie Sidibeh to win the golden glove.

Gambia Senior’s Dawda Sankareh lifted a rocket volley right from a diving cross at the edge of the box straight into the net leaving all four defenders and goalkeeper motionless.

Dawda’s classy skill left the pavilions cheering with a standing ovation from the fans.”

This is similar to Christiano Ronaldo’s goal in the Champions League against Juventus”, a fan shouted from the stands.

Mawlana Camara made it 2 in just few minutes before Abdoulie Baldeh was brought down in the box. The spot kick was converted to make it 3 nil for Gambia Senior.

Jubilation for this goal this goal was short lived as Nasir pulled one back through Momodou Alieu Jallow but as if that was going to lift up hopes for the Basse hopefuls, play maker Abdoulie Baldeh scored his second for Gambia Senior Secondary School kill whatever rejuvenation by the opponents.

This is the fourth edition of The Gambia Football Federation (GFF) national schools football competition, dubbed The Principals’ Cup, sponsored by GTBank and organized by the Gambia Schools Football Association an affiliate body of the GFF.

Its a Grassroots competition that is meant to bring together boys and girls from schools across the country in Upper and Senior Secondary Schools.

It takes the form of a national championship at regional level and it is the eight best teams that qualifies for the final stages. Eight other teams also qualify at the Senior level making a total of sixteen teams altogether.

The national championship is sponsored by the GFF but Football House has outsourced the organisation of the competition to The Gambia School Football Association, a member association of the Federation.

The weekend Finals was graced by the GFF president Lamin Kaba Bajo and Executive Committee members of the GFF, GTBank Officials and the Ministry of Youth and Sports.