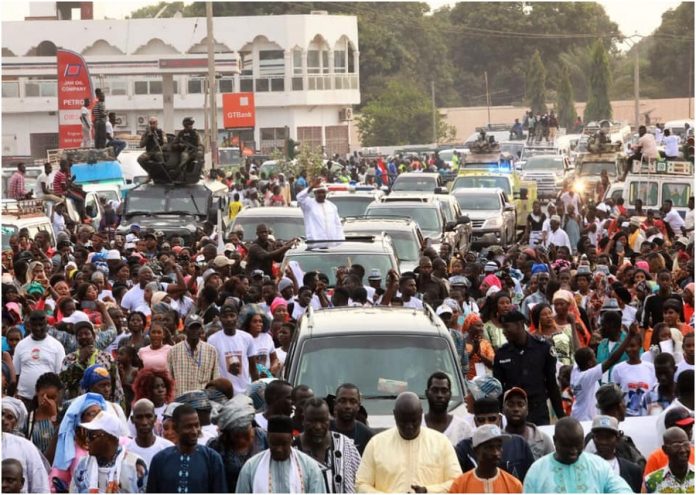 Though the organizers of the much-vaunted Brikama rally have not disclosed the agenda of the rally, the overriding motive is unmistakable.

The choice of Brikama as a venue for the rally is no coincidence, given the township’s historical role as the nation’s political powerhouse and powerbroker.

It has long been held that whoever wins Brikama wins the election.

The country’s leadership used the event to send out a stern warning to the people planning to demonstrate come December against plans by the President to serve out his five-year constitutional term.

Speaker after speaker, including senior government officials, warned the would-be protesters of dire consequences, accusing them of undermining national security.

The Operation 3 years Jotna has launched a campaign calling for the President’s resignation after 3 years in power, as per the gentleman-agreement reached with Coalition partners.

Public opinion is sharply divided over the issue.

The President, though, has made it abundantly clear that he will serve until 2021 after he had initially promised to oversee a three-year transitional period.

A political showdown is widely expected in December amid steady political wrangling over the issue.

Critics have taken to the social media to condemn the speeches and characterized them as an intimidation tactic by the Government to deter any protests over the contentious matter.

The rally also targeted the President’s political rivals who are seen to be a threat to his unbridled political ambitions.

The speakers minced no words in deriding and ridiculing politicians who are perceived to be out of step with the President’s political agenda.

It’s now clear that the President has secured the backing of junior partners, including NCP, GPDP, NRP and GMC in seeing through his five-year term.

Some observers are even foreseeing a possible coalition between these four parties and a potential party that might be formed by the President to contest 2021 election.

The question remains as to whether these parties are solid enough to fulfil the President’s political ambitions.

It equally remains to be seen whether the political backing of the President’s supporters will translate into tangible votes should Mr. Barrow decide to extend his rule beyond 2021.