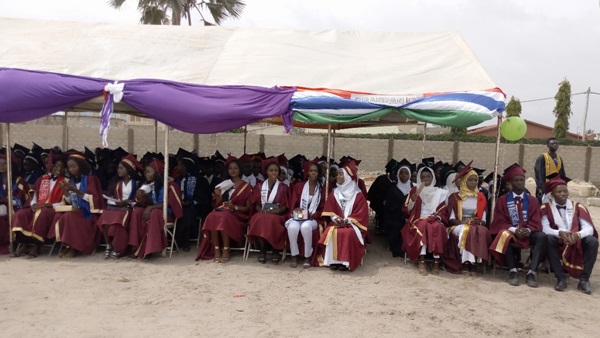 A total of 227 students last week graduated from Brusubi Upper Basic and Senior Secondary School upon completion of a 3-year academic studies.

It marked the school’s fourth graduation since inception in 2013.

A cross section of high-level dignitaries, parents and friends of the graduating students attended the award-giving event staged at the school’s grounds in Brusubi.

\
In his opening remarks, Peter O Jatta, principal of the school praised the commitment and attitude of both his staff and students. He said their hard work is a testimony of the school’s continued growth.

“The school will continue to give its best in terms of performance, and I am happy to report that the students have lived up to expectations and performed very well in all national examinations,” he stated.

Unicef education specialist, Nuha Jatta, spoke on the theme “the power of human brain in the struggle between truth, opinion and lies”.

He stated that the human brain is the most precious gift of nature, and if damaged or defective it could result to speech defectiveness, visual and physical impairment or learning difficulties.

“It is the power of the brain that controls our reasoning and enables us to distinguish good from evil, to know right from wrong and enhance our freedom of choice” he said.