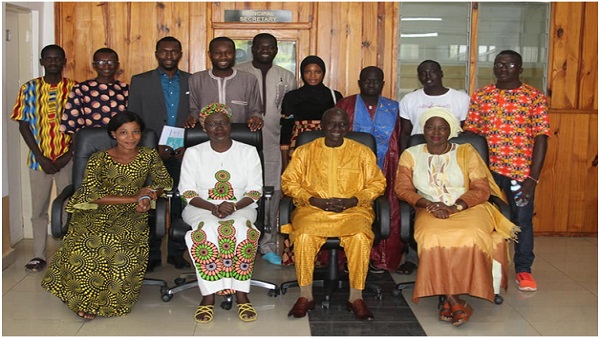 A Coalition of Civil Society Organisations on Fiscal Transparency (CCBT) ratified a set of almost 70 recommendations and submitted them to the Constitutional Review Commission (CRC).

The recommendations aim to institutionalise fiscal discipline and curb corruption in The Gambia via the Constitution.

According to the position paper “there is an urgent need for the National Budget and sovereign national wealth to be distributed equitably among all Gambians”.

On the CRC’s official Facebook page they posted that “Civil Society Coalition on Budget Transparency on Friday July 12, 2019 presented their position paper to the Constitutional Review Commission (CRC).

The position paper includes recommendations aimed at helping the CRC ensure fiscal discipline and curb corruption in the new Constitution.”

The submission took place at the CRC’s Headquarters next to Kotu power station.

During the submission CRC vice chairperson Mrs Hawa Sisay Sabally told the Coalition that their position paper would be considered and forwarded to the CRC Technical Committee on Public Finance.

The Technical Committee which begun sitting in March was tasked “to investigate and consider any technical matter related to public finance management”.

Considering how this features into the National Development Plan (NDP) highlights that there is significant reference to transparency and accountability in the NDP, however, many of the measures to promote this agenda are not apparent in President Adama Barrow’s government.

National Development Plan
(2018 – 2021) page 133
Figure 1 Timeline to position paper
Position Paper
Here are some of the recommendations in the position paper;
1. It is recommended that every Presidential Candidate must disclose their assets and finance publicly and not under a seal of secrecy to the Ombudsman.

In addition an outgoing President must declare his/her assets within 6 months of vacating office.

2. In this position paper it is assumed that an Independent Anti-Corruption Unit will be formed, however in the current absence of this body an Independent Commission which could fulfill this duty should be considered.

5. Where a political party fails to provide its audited financial statement within the prescribed period (and, if granted an extension, within the period of extension) and fails its financial obligations.

It is recommended that If a party fails to fulfill its financial obligations as stated above they should be warned to do so within a month.

Failure to do so should be suspended include a penalty.

The party should only be reinstated after fulfilling its duties and settling penalties after consultation with the IEC and or Anti-Corruption Unit.

About CCBT?
The CCBT is formed of Civil Society actors which have undergone training on Fiscal Transparency and Budget processing.

Disclaimer
The author of this article is also a participant on this Coalition.