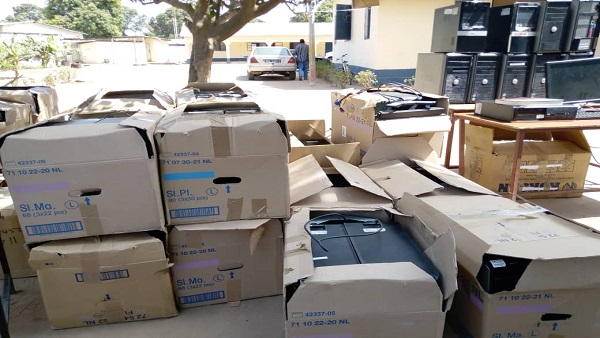 Saamasang Technical Upper Basic and Senior Secondary School in Brikama, last Friday received sixty-five computers including printers and books from Mission Gambia Malta to promote ‘smooth teaching and learning in the School’.
Speaking at the handing over ceremony held at the school’s premises in Brikama, the school’s board of governors chairman, Fabakary Fadera, said the donated materials will enhance teaching particularly on computer knowledge.

According to him, the school has become “one of the best result-producing” schools in West Coast Region, and the latest donation would help take the school’s overall performance to higher heights.
Charity Saama Kairo Federation manager, Edirisa Cham thanked Missionn Gambia Malta for the donation.

ChildFund The Gambia country director Musukuta Komma, spoke on the importance of education, telling students that if they work hard and stay committed to their education, “the future is bright” for them.
Principal Musa Baldeh, expressed delight with the donation.
He said the school was “poorly equipped with ICT equipment” but now with this gesture, performances of both students and teachers will improve.
Mission Gambia Malta, a non-profit organisation based in Valletta, Malta was established in 2015 to help Gambian students fulfill their dreams of an academic degree.

- Advertisement -
Share
Facebook
Twitter
Pinterest
WhatsApp
Previous articleCoalition governments: Should the current administration in The Gambia set the structures of democracy and development or uphold what was inherited?
Next articleMadi Jobarteh’s monumental theological and philosophical bankruptcy
Join The Conversation