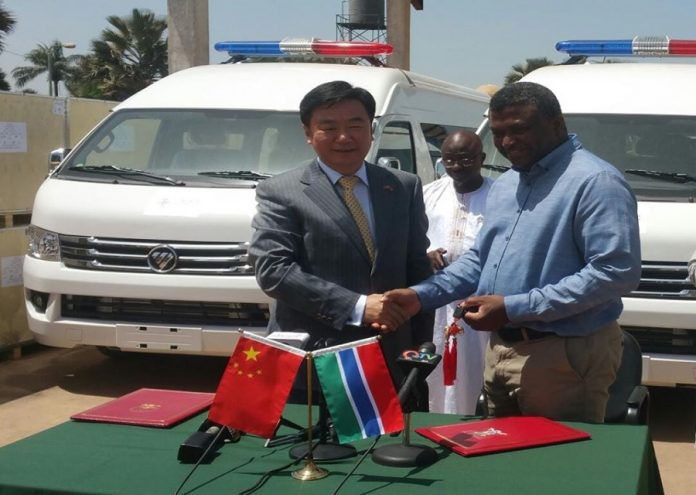 The Chinese government through its Ambassador, Ma Jianchun yesterday handed over D10 million worth of medical equipment, medicines and two medical-purposed vehicles, to the Gambia government. China also revealed the availability of ten Chinese doctors to help in the Gambian health sector.

Speaking at the ceremony, Ambassador Jianchun said the medical team will continue to closely cooperate with the Gambian government and its development partners to safeguard the health and security of the Gambian people.

“Myself and Hon. Minister Samateh have been keeping in close contact on the work of COVID-19 prevention. I admire him and his team for their hard work and tireless efforts in preventing the coronavirus from entering The Gambia, and I am ready to join hands with him in assisting the Gambian government.

“We have requested Chinese citizens to postpone as much as possible their scheduled travels to The Gambia. None of the Gambian citizens living China contracted Coronavirus. China is ready to join hands with The Gambia, closely communicate and share outbreak prevention experience, help in relevant coordination work, and together contribute to the public health cause of the globe,” Ambassador Jianchun explained.

He also disclosed that his country has dispatched a total of 15 medical teams, over 180 doctors to work in The Gambia, and has helped The Gambia build 4 health centers.
Dr Ahmadou Lamin Samateh, the Minister of Health said the donation was not the first time China provided a medical team or medical equipment to the Gambia.

Minister Samateh said since 2017, the Chinese government has consecutively sent medical teams to The Gambia, treating over 10,000 Gambian patients as well as partnering with the Edward Francis Small Teaching Hospital to build a gynecology center.