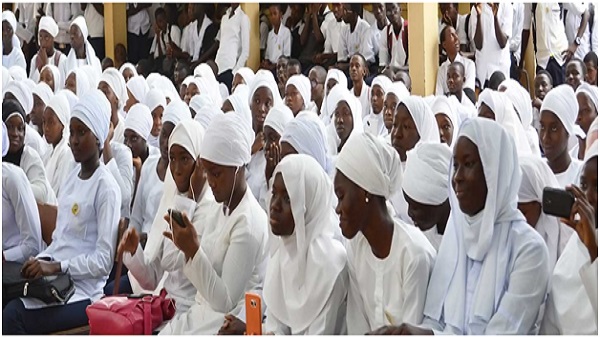 The Ahmadiyya Muslim Students’ Association,(AMSA) of Nusrat Senior Secondary School last Saturday organised a peace symposium on the theme ‘The Role of Students in Peace Building’. The event was attended by students and staff of the school. It was held at the school grounds.

Mamadi Ceesay, the principal of the school, spoke on the importance of peace. He praised the members of AMSA for organising such an important event saying that it shows their level of maturity and concern for their country. Principal Ceesay urged all students to endeavor to maintain peace by exercising a high level of tolerance.

The next speaker was Nyimansata Camara, a former student of the school who is now a lecturer at the University of the Gambia. Ms Camara spoke at length on the methods of attaining and sustaining peace in the society. She said that one cannot give what they don’t have and therefore, a person should be at peace with themselves before being able to spread that peace in society.

Murabbi Abdurrahman Cham, also a former student of the school now coordinator of Muslim Television Ahmadiyya, (MTA) spoke on the Islamic perspective of peace. He quoted extensively from the Holy Quran and the Holy Prophet of Islam on what people should do to attain and maintain peace.

“For one to attain inner peace, one has to create a connection with Allah, the Sublime,” he noted, urging all and sundry to try to be righteous so they can have that connection.
Pastor Seal Sylvester Jammeh of the Gambia Christian Council, spoke at length on the Christian perspective of peace. He said that one has to cement the upward connection,i. e. the link with God, the Almighty and then spread the love among his fellow human beings.

He spoke about tolerance and acceptance saying that we all have to accept each other and make use of dialogue to resolve our issues rather than confrontation. “Man has to be always willing to serve his fellow beings and that is how peace will be built,” the pastor said.

Master Yaya Fatty, the president of AMSA gave the vote of thanks. He told the gathering that the importance of peace cannot be overemphasised. He thanked the speakers for taking time from their busy schedule to come and share their opinions with the students.