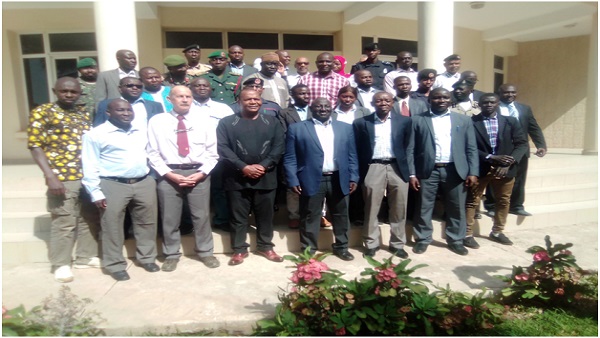 Geneva Centre for Security Sector Governance (DCAF) last week completed a two-day forum designed to review and discuss its position paper submitted to the Constitutional Review Commission.The meeting was staged at the NaNA Conference Hall in Kanifing.
Officials from the office of National Security and men and women of other security agencies including stakeholders attended the meeting.

The review served as an opportunity for participants to look at some of the laws and policies that may require review in their quest for a successful Security Sector Reform.
The aim is to provide a succinct report to the CRC incorporating comments and feedback on the provisions of the constitution prior to submission of the final draft by the CRC to the government, officials said.

Pansaw Nyassi, interim country head – DCAF Banjul, said DCAF, with funding from the United Kingdom, has committed to providing support to the Constitutional Review Commission (CRC) to not only provide a technical review of the draft constitution but also to facilitate consultation on it.

“DCAF assists partner states and international actors supporting these states, to improve the governance of their security sector through inclusive and participatory reforms based on international norms and good practices,” he said.

Momodou Badjie, National Security Adviser, said the development of a draft constitution for The Gambia is a critical part of the SSR process and as such it has garnered significant attention amongst not only the security agencies but also a wider range of stakeholders in the SSR process.

“It is widely recognised that the constitution is likely to play critical important role in defining the roles, mandates, powers and oversight of the security sector”, he stated
Badjie described the forum as significant, saying it could not have come at a better time “considering the ongoing efforts of the government of The Gambia to undergo a holistic reform of institutions, regulatory framework and structures as we transition from 22 years authoritarian rule to democracy”.

Meanwhile, there are concerns that the SSR is not being felt as the many issues it came to address still persist, leading critics to label it as a “total failure”.