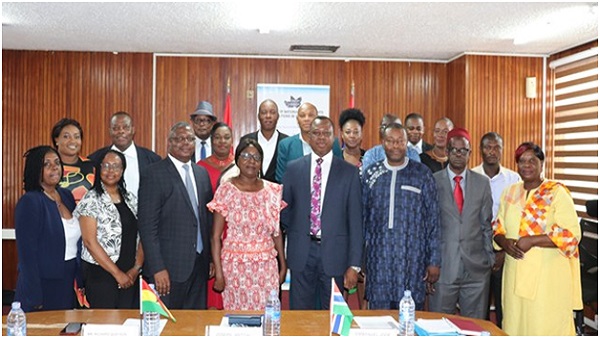 The Constitutional Review Commission (CRC) has continued to engage more Gambians living in the diaspora as part of efforts to build a new Constitution for The Gambia that will stand the test of time.

The latest engagements target Gambians resident in the United States.

Gambians in the diaspora, who are generally regarded as the eight region, are crucial stakeholders in the ongoing national dialogue on constitutional reform, hence the need to consult with them.

Two additional meetings are scheduled for Atlanta on 4th July and New York on 6th July, 2019.

Addressing the Seattle consultation, the Gambian Ambassador to the United States, H.E Dawda Fadera, said the CRC consultation with Gambians in America is an important exercise as it provides a great opportunity for them to contribute towards the constitutional building process.

Ambassador Fadera further told participants at various meetings in the United States that: “The authorities for the first time have assured the inclusion of Gambian diaspora to participate in the building process of the Constitution which is indeed commendable. The diaspora have the experience, the expertise and the exposure to significantly contribute towards the Constitutional review process.”

The Chairman of the CRC, Justice Cherno Sulayman Jallow QC (JSC), reminded Gambians at various US meetings of the power and the mandate of the CRC which he said are clearly outlined in the Constitutional Review Commission Act, 2017.

Justice Jallow commended Gambians living in the Diaspora for their dedication, passion and commitment in the Constitution building process, saying that ‘everybody sees the process as a national endeavour and this has been helping the CRC.’

He reminded the Gambian diasporans that the CRC started its public consultations in The Gambia where the CRC consulted 106 communities throughout the country in four months.

“A Constitution is far too fundamental to be representative of only eleven minds.

The best we can do is to ensure proper representation in the making of the new Constitution, to be inclusive, and to create appropriate platforms for Gambians to participate and take ownership of the process,” the CRC Chairman emphasized.

He said it is important to have a face-to-face dialogue with Gambians in the diaspora ‘because living outside The Gambia does not make you less Gambian than Gambians living in The Gambia’.

The external public consultations, according to the CRC Chairman, Justice Cherno Sulayman Jallow, are meant to seek the views and aspirations of Gambians living outside of The Gambia ahead of the drafting of a new Constitution for The Gambia.