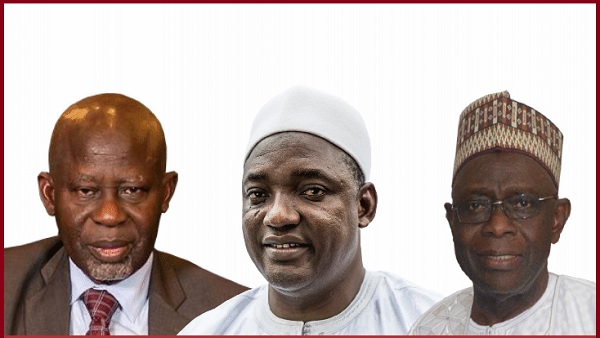 Former vice president and leader of the UDP, Ousainu Darboe has reacted to his sacking in a characteristically subdued tone, even cracking jokes about it to a crowd of supporters who trooped to his house immediately the cabinet reshuffle was announced.
“I think the bus conductor has decided it is my time to get off the bus,” he joked to a hilarious laughter from the crowd.

However on a more serious note, Darboe asked his supporters to remain law-abiding and called on UDP national assembly members to avoid politicising the assembly, noting that the House is a very serious place where the fate of the country is discussed and formulated. He told his supporters one positive thing about the sacking is that he would have more time for himself and other things without the burden of Government functions to think of. He also called for calm over the ruling of the Ya Kumba Jaiteh injunction, reminding the crowd that the case is not completed as the substantive matter of the case is yet to be decided.

However former trade minister Amadou Sanneh, who was the immediate boss of President Barrow in the UDP, accused the president of betrayal.
Addressing sympathisers at his house over the weekend, Sanneh said he was always expecting that the eventual parting will come and had since prepared himself.

“I have always suspected Barrow’s moves since he began saying that even before he settles down people in the UDP want to overthrow him. But I want to make it clear that the UDP will remain unbroken. If we could stand up to and survive the fight against Yahya Jammeh’s dictatorship for 22 years, supporting and bailing each other socially and politically, we can still withstand this new betrayal,” he said.
Mr Sanneh further called on supporters to realise that the struggle must continue because President Barrow is now listening to the APRC and Yahya Jammeh’s people who have wrecked this country.

“These are the people advising him and this means that we must renew the struggle,” Sanneh said. He cited examples of appointing an APRC man as Governor of CRR as well as emboldening the likes of Chief Yahya Jarjusey of Jarra Soma and his wife against an activist like.

“All these are examples that Barrow is listening to the same people with whom Jammeh destroyed this country,” he stated.
Meanwhile there has been a deluge of comments and divided opinions among Gambians on the matter.

While most political opponents of the UDP and Darboe, notably APRC supporters celebrated the reshuffle, others mainly UDP supporters, accused President Barrow of betraying the party that facilitated his presidency.

Some neutrals blamed the UDP for emboldening President Barrow to grow feathers by refusing to join other coalition parties’ position for him to go after three years.
“The UDP has themselves to blame for helping Barrow to betray the Gambian people’s trust and the mandate of three years and now, like the proverbial mad dog, he has turned on its own master,” one analyst said online.