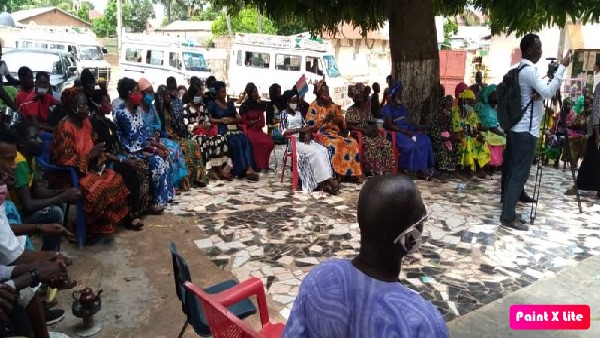 A crowd of people from Niumi, claiming to be supporters of the opposition Gambia Democratic Congress, yesterday shifted to the National People’s Party.

Led by a sitting GDC Councilor of Medina Sering Mass, Amadou Bah, the group gathered at the Brusubi residence of business tycoon Sillaba Samateh to make the declaration.

“Barrow has shown respect, tolerance, compassion and commitment to embrace everyone no matter their background. He has also provided or about to provide us with electricity, good road networks among other things and therefore he deserves our support,” Councilor Bah said. He also praised President Barrow for bringing about a good relationship with Senegal as opposed to the frequent strain in relations and border closures that affected people living in Niumi during the previous regime.

Momodou Lamin Jallow, claiming to be the Lower Niumi logistics officer and regional mobiliser of the GDC, said they joined GDC for development but have seen even more of that in the agenda of the NPP and President Barrow.

Jallow, who claimed be among GDC militants who mobilised the support base for the party in Niumi, said now GDC will not even score 1000 votes in that area.   “All the 23000 votes there are already for Barrow because he is the one who delivered on all his promises to us. We can’t wait any longer for someone who gives us empty promises,” he said.

Sukai Senghore, claiming to be lady president of the GDC, said she was the one who mobilised women for GDC to secure victory in her area. But according to her, President Barrow has now done enough, electricity, a hotel, among others including the upcoming Hakalang road, all of which have transformed the lives of Niumi residents.

Ebrima Cham, claiming to be the chairman of the Barrow 2021 campaign, said the cross-carpeters are interested in the development of their area and President Barrow is the one doing that. Most speakers thanked tycoon Sillaba Samateh for transporting them all from Niumi to Kombo.