Edward Singhatey at the TRRC: Lying and evasive and unpardonable 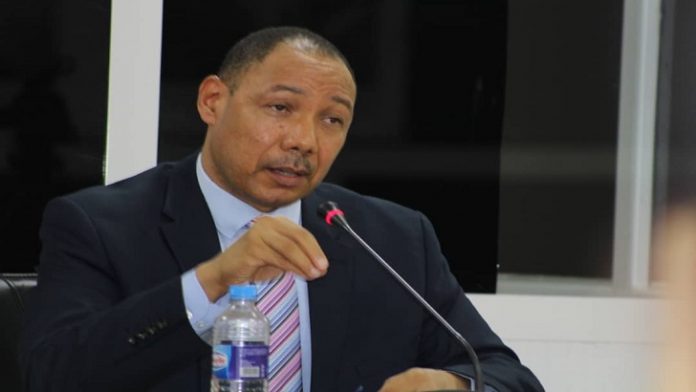 It was quite an experience watching Edward Singhatey’s marathon session in front of the TRRC. The scope of the testimony and level of scrutiny was befitting an individual who was only second to Yahya Jammeh in terms of responsibility in the countless crimes that occurred under the 22-year dictatorship.

The game plan that Edward Singhatey had was obvious after only a few minutes of grilling by the TRRC’s Lead Council, Essa Faal. It appears that Edward Singhatey decided to come before the TRRC by only accepting what was impossible to deny and denying any personal culpability if there is a possibility to sow a little doubt, no matter how tiny.

What is undeniable is that Edward Singhatey was a key member of the Jammeh dictatorship, both in the AFPRC military council and the APRC government. Knowing this, Singhatey quickly made it known that he would accept collective responsibility for any crimes committed by the Jammeh government, whether he took direct part or not. He knew there was no plausible way of denying this. This tactic allowed him to take moral responsibility. This was the minimum acceptable burden for anyone who worked in such a government.

Where there were allegations involving Edward Singhatey personally and directly committing grave crimes, it became quite obvious that he would refuse to admit any culpability no matter how overwhelming the evidence. He apparently has decided that, instead of coming before the TRRC and own up to his crimes and ask for genuine forgiveness, he will leave the burden on not only Essa Faal but also on any future prosecution. There were so many terrible crimes that various witnesses directly tied to Edward Singhatey that one cannot help but be amazed by his steadfast refusal to admit any personal culpability throughout no matter how strong the evidence. It was evident that he appeared before the TRRC to try to benefit from the reconciliation but without shouldering any of the burden of owning up to his heinous past.

Numerous witnesses put Edward Singhatey at Mile 2 prison terrorising and torturing prisoners. Yet he denied any personal involvement. Several witnesses saw Edward shoot the solidier Kebbeh under interrogation in a room with only a handful of people. Yet he not only denied it but inexplicably could not be made to state who he believed made the shot. Several witnesses placed Edward not only at Yankuba Touray’s house on the night of Ousman Koro Ceesay’s murder but fingered him as one of the actual killers. Yet he denied being even present in Yankuba’s compound on that fateful day. He claimed to have merely arrested Sanna Sabally and Sadibou Haidara on trumped-up charge of attempting to overthrow Jammeh when several witnesses provided corroborating evidence that he plotted with Jammeh and even helped transport his former council colleagues to their dreadful fate at Mile 2.

The logic of Edward Singhatey’s strategy is as follows. Having seemingly accepted moral responsibility through collective failure, he sought to ask for forgiveness and reconciliation from victims while limiting his legal liabilities. He knows that the allegations and charges against him are too numerous and too serious to be easily forgotten or wiped away through a pardon. And that a trial of some form, whether a civil suit or criminal prosecution, after the TRRC was likely. And therefore, he shrewdly surmised that appearance before the TRRC was an intermediate battle in a long-term struggle.

Therefore, to understand Edward Singhatey’s testimony before the TRRC, one has to understand that his ultimate audience is not the TRRC. In employing this strategy, the jury he was playing for was not the members of the TRRC but rather the audience watching at home and any future group of individuals that might seek justice at a later date.

Thus, when he laughably claimed to be taking collective responsibility, he would avoid details and practically ignore Essa Faal’s questions. Often, it was as if his audience was not TRRC but some group watching from outside. Even the decision to switch into local languages as he begged for forgiveness and understanding was tactical rather than a sincere desire to show remorse and contrition because it was driven less by desire to speak directly to victims but rather to dissemble. Fortunately and unfortunately, our local languages are rich in ways that help speakers build rapport with their audiences. But these same features allow speakers to speak in generalities and parables in such a way that the establishment of fact and attribution of individual responsibility can often seem beside the point.

The language and the strategy that Singhatey used when he needed to run away from personal responsibility could not be more different. Specifically, when he needed to dodge personal responsibilities for crimes he most likely committed, he revealed his cunning and legal training by attempting to raise doubts about the credibility of witnesses through countless denials and frequently pointing to minor inconsistencies from witnesses no matter how extraneous or immaterial. This way, he hopes to weaken a future prosecution by sowing enough doubts.

This strategy is more than just preparing for a future trial. Even if Singhatey were to prevail in a future criminal or civil trial, he would be a permanent pariah if he admits culpability in acts such as the bashing in the head of the late Koro Ceesay or shooting an unarmed man in an interrogation even if he were to be pardoned. Some acts such as the killing of Koro Ceesay are so graphic that they become seared into our collective memory that someone such as Edward Singhatey who is widely considered as the most responsible would forever be tainted by it. He can essentially say goodbye to the consulting opportunities that are currently paying his bills or any association with almost any honorable individuals or entities. By continuing to make denials about personal culpability no matter how overwhelming the evidence, he hopes to project plausible deniability that could give other people or entities the room to continue to associate with him if they are so inclined. This way, he could continue to protest to people not to prejudge him until he is actually convicted in a court of law.

Unlike Yankuba Touray, Edward Singhatey is intelligent enough and has the legal training to know that hiding behind a questionable constitutional immunity clause was not a viable defense, especially when allegations include crimes that have nothing to do with their official duties. His strategy of dodging personal responsibility but pretending to take collective responsibility is a long shot but that is only reflective of the fact that charges against him are highly credible and well corroborated.

Edward Singhatey fits the classic description of a psychopath. This is no hyperbole. Many psychopaths are intelligent and bold but they also have impaired ability to empathize with others, which makes them capable of extreme cruelty. While they can feign remorse, they do not genuinely feel it. This is why many psychopaths can carry out heinous crimes without feeling the burden of guilt that most normal people would. On the outside, they can seem calm, reasonable and considerate but those are just masks.

Even Edward’s own testimony supports this. It was instructive to see numerous examples of people who were extremely kind and generous to him and his family. Yet he had no trouble abusing and terrorising these same people and their loved ones when he was in a position of power. These included the likes of MC Cham, Ousainu Darboe and the father of the late Ousman Koro Ceesay. While he claimed he felt remorse, there was no evidence that he apologised to those people despite countless opportunities to do so. Psychopaths can fake emotions but they do not genuinely feel them.

Nobody should be fooled into believing that Edward Singhatey is brave to volunteer himself before the TRRC as he would want us to believe. He appeared because he had no choice. Given the evidence against him, his only alternative was a life on the run as a fugitive from justice if he refused to appear before the Commission. His attempts at appearing wounded because Essa Faal correctly called implied that he is lying is nothing but a ploy to play the victim. In reality, he did not admit any personal responsibility for his crimes. Therefore, his offer of taking collective and moral responsibility is meaningless and should be completely discounted.

What we can clearly tell from Edward Singhatey’s appearance in front of the TRRC is that he is a liar and a horrible human being capable of committing heinous crimes that leave no burden on his conscience. The strategy with which he approached the TRRC is a mockery of what the Commission is trying to achieve. Edward Singhatey is the last individual deserving of a pardon among those who appeared before the TRRC so far. Putting this individual in any reconciliation process would be mockery and farce. He needs to face trial and answer for his crimes.