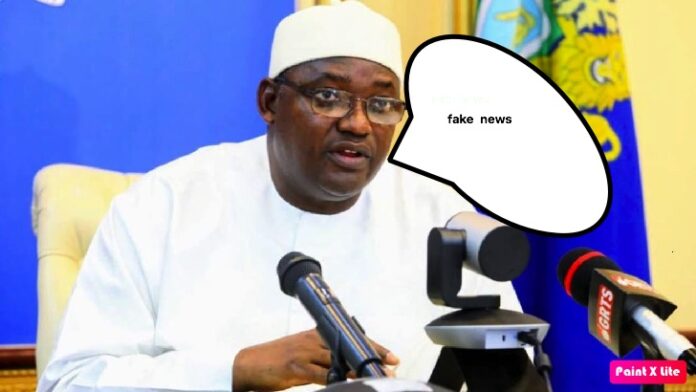 Isn’t it sad that there are so many naughty people in The Gambia and the diaspora, who doesn’t understand better than to criticize the president and his government? Oh, it pains me so I can hardly sleep at night. Not!

Oh, I really tried to write about something else than President Barrow this time, but it is impossible! He stands out from the crowd, and not in a good way. Let us begin with the so called fake news. Mr Barrow seems to have listened too much to a collegue of his, Donald Trump.

Sorry to say, Mr Barrow, but you chose the wrong idol! Donald Trump stayed in power for four years, thanks to the fact that he has been useful. Don’t get me wrong, he has only been useful for the already very wealthy, not for anyone else. For some strange reason you then have a lot of middle class people, and too many below that, who refuses to see the truth about this narcissist.

You know what a narcissist is, right? Someone who adores him/herself and has no interest whatsoever in anyone else or their wellbeing. It is all about me, me, me!

A narcissist is keen of having the ”right” people around, those who are useful and who says the right things. If not – there’s the door! A narcissist gets temper tantrums when things go wrong, like if that person loses a competition – for example an election. For a narcissist it is important to always win, at any cost. Cheating or not cheating , it doesn’t matter as long as s/he is winning. A narcissist might have some intelligence, but is not using it for the right purposes. The mind is always occupied with ”what’s in it for me”, so there is no time for anything that could concern someone else.

Mr President, you said multiple times in an article that people in radio and TV have said bad things, and even false news as you call it, and not been arrested. Imagine how ungrateful people are that they keep on complaining about you and forget to praise you! Maybe we should begin every morning’s broadcast with a moment of praise for your achievements? It wouldn’t take long, but you might be glad to hear it.

I wonder if you truly understand what defines a democracy? In a democracy people should be able to take for granted that they shouldn’t fear being arrested because they express their opinions freely, or go to work in the morning. You need to do some research before you speak out next time, Mr President.

Research is not the only thing you need to spend some time with, checking the background facts before you speak out is another matter. In a recent article in The Standard Newspaper you asked your vice president to deliver a statement for you.

This was during the fourth Stake in the Nation Forum, SNF4 online global discussion, where you hailed the Gambian Diaspora for contributing 30 billion dalasis of remittances to the country’s economy in 2020.

You thanked the Diaspora for their “patriotism, immense financial input and other development contributions.”

How kind of you to thank the Diaspora for doing what you are unable to do. If it wasnt for all our brothers and sisters who works so hard in the Diaspora, too many families would suffer more than they do now. Shame on you! You might have thought that you did something good by mentioning all the Diasporans, but instead you made a fool of yourself!

You thanked them for their ”patriotism, immense financial input and other development contributions”. Can’t you see that saying this is like throwing s**t in a fan? It comes back at you and makes your actions dirty.

The Diasporans don’t send money home to their loved ones because of some sense of patriotism. They do it because they don’t want their families to starve! Can’t you see that they are doing your job? What have you and your government done to improve the living conditions in The Gambia? Tell me! Tell us all! Speak out and give us some of your own ”fake news”, we are really interested. 30 billion dalasi in remittances! Is it even possible to count that far? Shame on you, mr President! The hope all Gambians felt when you became president, and you have failed them so hard. How is it possible to even for a second consider that you should become re-elected? For what reason? Five more years of misery so the whole country is in deeper dept than ever and sold for five butut to the Chinese?

Your vice president went together with a delegation to Switzerland to strengthen the relations between our two countries. Why is that relation suddenly so important? What are you expecting from this expedition, except from selling out our youth who managed to get to Europe? They are called illegal immigrants, as if it would be illegal to have the urge to survive? It is not like these youths took a tourist trip to Switzerland and decided to ignore the expire date for their visa. They fled the poverty and the dispair in the country they call their home. They took huge risks to be able to get to Europe. They faced death, prison camps, abuse, beating, robbing of their belongings, starvation and illnesses to get there.

What are you offering those who return home? Do you think they will come willingly? Does your pal Hamat Bah still think that it is a great idea that the home-coming boys get married to Gambian girls as soon as possible? There is a lot of activities going on under Mr Bah’s straw hat, so just ask him. He is always very outspoken and has some creative ideas, but they are not that well thought through.

I wonder if you have considered that the people who now are forced to return to The Gambia, belong to the Diasporans? You know; those who chip in with some 30 billion dalasis? Oops! You didn’t think of that? Ah, what a pity, because now you will find that this money pit is drying up a bit.

There are always different ways of approaching a matter. Were you forced to agree to get our ”illegal immigrants” back to The Gambia? The relations between Switzerland and The Gambia should be strengthened by this agreement. How? We need to know because those who are forced to go back home are not strengthened at all. They survived the extremely hard journey to Europe, and are soon to be sent home to – what? Starvation? You don’t have a plan for them, admit that! You just tell that to the Swiss delegates to give a good impression. Behind your sheepish faces hides a wolf with sharp teeth. Stop praising yourself, Mr. President, because your actions speak louder than your words.