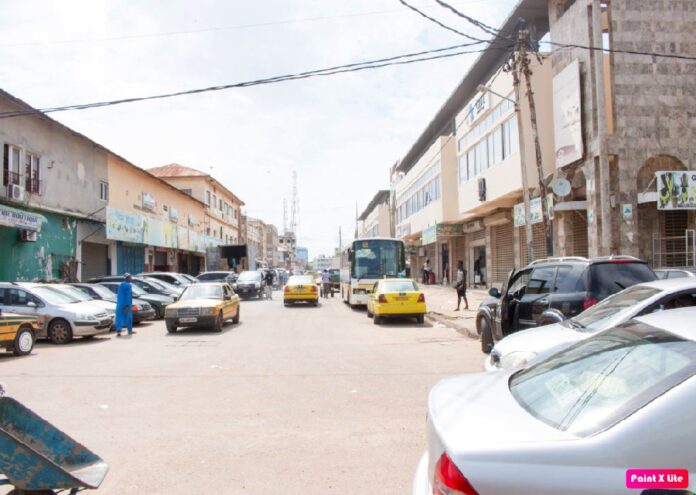 Najah Enterprise, a sole proprietorship, and Kiram Limited, a partnership business, were both registered in The Gambia and deal in general merchandise and foodstuffs such as rice, sugar and flour.

According to business registration record, eighty per cent (80%) of Kiram, registered in 2015,

Less than two months after registration, Najah made three payments totalling $159,707, equivalent to more than 6.2 million Gambian dalasi at 2016 exchange rate. The payments, between 21st September to 12th October 2016, were all made to Grove Services Inc, a US-

based firm that trades and distributes in protein commodities such as poultry, beef, and pork.

Kiram, in one transaction in April 2016, made a payment of $34,859, equivalent to more than 1.3 million Gambian dalasi at 2016 exchange rate, to Grove Services Inc. The company’s transactions of unspecified amounts were also flagged in January 2017, October 2016 and December 2015.

According to a leaked document seen by this reporter, these transactions were flagged, not because of the financial volume, but because the addresses of Kiram and Najah match that of an entity tied to the Tajideen brothers.

Picton Street in Banjul where Kiram was located is the street where Tajco, a business that mainly imports foodstuffs, is also situated. Tajco Enterprise is one of the Gambian businesses of Hussain Tajideen, a Lebanese. Hussain is a brother to Kassim Tajideen who was designated by the US a ‘global terrorist’ and was sentenced to five years in prison for providing millions of dollars to Hezbollah, a Lebanon-based designated terrorist organisation.

Najah is located just across Picton Street on Liberation Avenue in Banjul.

Picton Street and Liberation Avenue are homes to almost all major firms involved in the import, wholesale and retail of foodstuffs. They are the busiest foodstuff business area of the

Background checks on the people behind the two companies, Najah and Kiram, both in The Gambia and Mauritania – their home country – did not reveal any potential connection to the Tajideen brothers. And there is no known presence of Hezbollah in Mauritania hence the slim possibility of patronage of that group.

Chouaib Mohamedou Habouss who owns 30% shares of Kiram Limited said they had nothing to do with Tajco or Tajideen.

“I don’t have any business partnership with Tajco. Nothing,” Chouaib said in his office. It is a fibre glass partitioned rectangular office, an enclosure of barely 3 by 2.5 metres in the shop, which is stock with mainly 50kg bags of white rice, cooking oil, sugar and other foodstuff.

“The only thing is, we used to be renting a shop at their premises,” he said.

Kiram was occupying a store at No. 1 Picton Street which was owned by the owners of Tajco. The land, though not owned by Tajco, was built by them and given out on rent under a leased agreement they had with the landowner.

In a one-floor storey building, Kiram’s store was directly under the offices of Tajco.

“So we used to pay our rent to them [Tajco],” Chouaib said. “This is the only financial transaction we have with them.”

In order to get themselves cleared, Kiram has now moved from No. 1 Picton Street to 61 Buckle Street in Banjul.

“Our new address has been submitted to the bank [Ecobank], the government business registration department and to all our international partners,” Chouaib, dressed in his traditional Mauritanian boubou, explained.

“And even before then, our business ownership structure was shared with all our partners, including with the financial regulators in America. So, at the moment we have no challenge in buying goods from abroad,” he said.

Like Kiram, Najah has also moved from its shop on Becca Plaza at Liberation Avenue. It is not certain whether it was due to the same reason, but efforts to locate the new premises of the business proved futile.

Before they moved out, the shared street and geographical proximity on a crowded retail street has set off some financial red flags about Najah and Kiram in their international transactions.

Kiram banks with Ecobank Gambia Ltd, while Nakah used to be with Skye Bank Gambia, but no more. Both banks refused to officially comment on the issue.

But an Ecobank source said Kiram had suffered for “their mistaken linkage” to Tajco or Hussain Tajideen.

In 2017, a huge amount of the company’s international fund transfers to buy goods from their foreign suppliers was blocked in America because they were assumed to be doing business or working with Tajco or Hussain Tajudeen.

for the money to be released,” the banker said.

In 2018, two fund transfers of the company meant to buy goods in Hong Kong and Dubai were also blocked. The first one was a transfer of 120,000 US dollars to purchase some wares in Hong Kong, and the second was a 40,000 dollar transfer to buy some cooking condiments in Dubai.

“The first one, the 120,000, was only released sometime this year 2020, but the other funds to Dubai are still blocked, but hopefully it would also be released soon,” the Ecobank staff explained.

The banker said Ecobank had applied some enhanced due diligence on Kiram but realised that the owners were cleaned and have no proven or known business connection to Tajideen.

“Ecobank has a strict compliance requirement, particularly on individuals and entities that attract international red flag, but there is nothing to worry about as far as this particular business is concerned,” the banker explained.

The other common denominator between the business of the Tajideen brothers and Najah and Kiram is Grove Services Inc. The America-based company was the supplier of both Tajideen’s Tajco like it is to Najah and Kiram. But the company is also the supplier to the majority of other major foodstuff importers in The Gambia.

Therefore, while Najah and Kiram fell under the radar of FinCEN in America, in their home country of The Gambia, the Financial Intelligence Unit did not have any information on them. In the agency’s database of suspected transaction reports (STR), there is no record of Najah or Kiram.

But according to business consultant Ebrima Sidibeh, the reason the companies’ transactions passed unnoticed in The Gambia could be because such transactions were not unique for businesses of that nature in the country.

“A general merchandise business engaged in import of goods like rice, sugar, and flour usually requires huge capital outlay to start strong. The initial investment can run into millions,” he said.

That aside, at the time of these transactions in 2015/16, there was no strong financial regulation in The Gambia on international financial flows. Even though FIU was official established in 2012, by 2015 the office was only partially operational for the senior cadre staff were still being recruited and the office was being equipped. It was only in 2017 when the FIU together with the Central Bank of The Gambia issued a guideline requesting banks to report to the FIU transactions beyond certain minimum threshold. For individuals, the threshold was D450,000, and for entities, D2 million. The thresholds were at the time similar to the limits in the US.

Momodou Drammeh, a former bank compliance officer, said reports generated from these transactions were not necessarily treated as suspicious: “they are just marked as transactions beyond the threshold.”

Other than this report, banks also send STR to the FIU. An STR is generated after any transaction that the bank feels, based on reasonable grounds, is prone to money laundering, terrorism financing, or other criminal conduct.

An STR is not based on the amount or the entities involved in the transaction, it is just what it is – an informed suspicion, Drammeh said.

According to him, the suspicion does not necessarily mean the transaction was improper or that it was criminal in nature.

Meanwhile, neither Najah nor Kiram is on the UN Consolidated Sanction List, a list of individuals and entities subject to sanctions measures imposed by the UN Security Council.

Likewise, they are not on any other country-specific sanction list.

And according to Gambia Revenue Authority tax records, Kiram and Najah are up to date with their tax requirements up to December 2019. However, efforts to ascertain the import value of the companies in 2015 and 2016 proved futile.

This article is written by Lamin Jahateh as part of the FinCEN Files investigation.

- Advertisement -
Share
Facebook
Twitter
Pinterest
WhatsApp
Previous articleGambia is at the crossroads: NA members must vote YES or etch their names in the wrong history book�
Next articleThe plight of the average Gambian amidst the Covid-19 pandemic
Join The Conversation