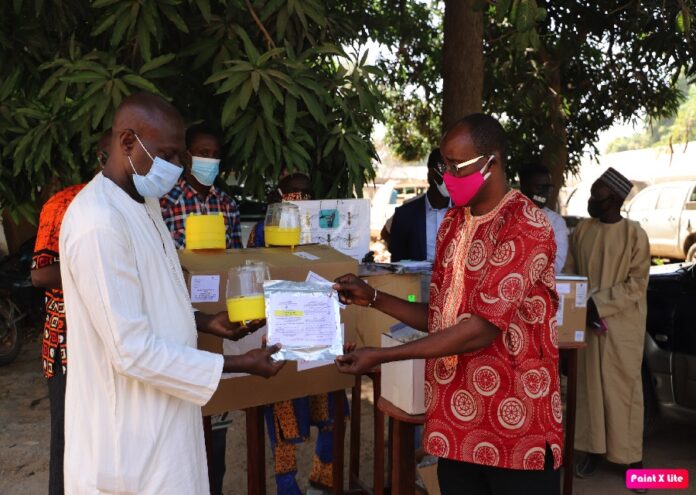 19 January 2021, Banjul – Fruit and vegetable production is one of the fastest-growing agricultural sectors in The Gambia, and provides both income and employment to growers and exporters. Mangoes, citrus, chilies, papaya, and watermelon are among the most common fruits and vegetables grown for domestic urban markets and export. The Gambia produces a lot of mangoes which presents it as a great export opportunity. However, the sector is threatened by the existence of insect pests notably fruit flies which cause damage to fruits and vegetables.

This problem is further compounded by the loss of market opportunities through the imposition of strict quarantine rules by importing countries. According to reports from National Agricultural Research Institute (NARI), the damage caused by fruit flies on crops particularly mango is estimated at 35%. The pest has increased interceptions and destruction of exported fruits from the Gambia that are destined for the EU market.

In a bid to address this problem as well as boost production and export of mangoes, Food and Agriculture Organization (FAO) the Gambia, handed over an assortment of fruit flies pheromone attractants and traps as well as two laptops and one printer to officials of Plant Protection Services (PPS) of the Department of Agriculture. In a ceremony held at the grounds of PPS in Yundum, Ousman Touray, Senior Programme Officer at FAO, handed over the equipment on behalf of the FAO Representative. The items which are European Union funded include: Methyl Eugenol (MEe), cure lure, Terpynyl Acetate (TA), trimilure, torula yeast tablets, DDVP, and yellow traps.

In his remarks, Touray noted that the equipment would be used to monitor and study fruit flies to determine population dynamics and peak population period in mango orchards and pack houses.  “The information derived from this will help to design timely and effective control measures against fruit flies in the major mango growing regions of the country” he said.

In receiving the items, Lamin S. Darboe, Principal Plant Protection Officer, hailed the initiative, describing it as timely because mango trees have just begun flowering. He said that stakeholders in the mango production sector have experienced a lot of losses due to the damages caused by the fruit flies. He furthered that the delivery of the equipment which will be made available to mango farmers, is a welcome gesture. “With this equipment, fruit flies damage on mangoes will be reduced and the quality of fruits produced by farmers will be improved. Consequently, this will minimize unnecessary interception and rejection of commodities destined for export to EU market” he concluded.

Other speakers at the ceremony include Elizabeth Mendy, Senior Plant Protection Officer, and Lamin Darboe, Deputy Director of dministration, Department of Agriculture.