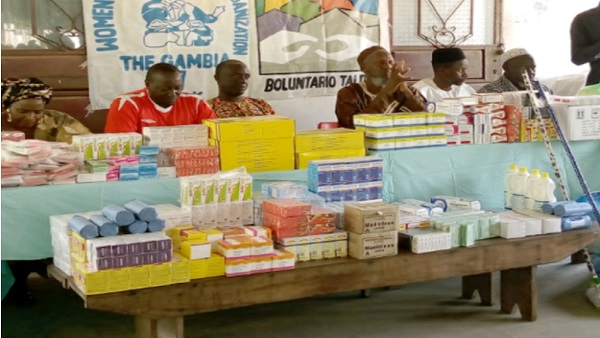 Hondaribia Katsikas and Helduak, humanitarians from Spain over the weekend donated medical items to Farato Health Post in the Kombo South District of the West Coast Region.
They also donated some provisions to the people of the area.

The gesture came through the Women, Children Support Organisation of Busumbala, which aims to support women and children have access to quality health services. Some of the medical items include consumables and other drugs.

Speaking after the handing over ceremony, Bintou Gassama, Women’s Bureau executive director, underscored the significance of the gesture.
She recalled that this was the third time the donors supported the health post including some communities around its catchment area. “The donated items will go a long way towards improving the health conditions of patients visiting the health post on a daily basis,” she noted.

The Women’s Bureau boss said the Gambia government remains committed to making quality health services available to all citizens regardless, but she rushed to add that her government alone cannot do it.

She thanked the donors for their support.
Momodou Bojang, the councillor for Sanyang Ward, said: “No nation can develop in the absence of a quality health service delivery system. Therefore, the donors are immensely contributing towards the development of the country,” he said.
Kebba Kinteh, Officer In-Charge of the health post said the items donated were exactly what the health centre lacked.

The health post, he noted, needs to have a functioning lab so that the difficulties pregnant women face become a thing of the past, adding that they also need some structures which will serve the public health unit.