‘FJC And Yanks Never Told Me To Mislead TRRC’ – Kanyi 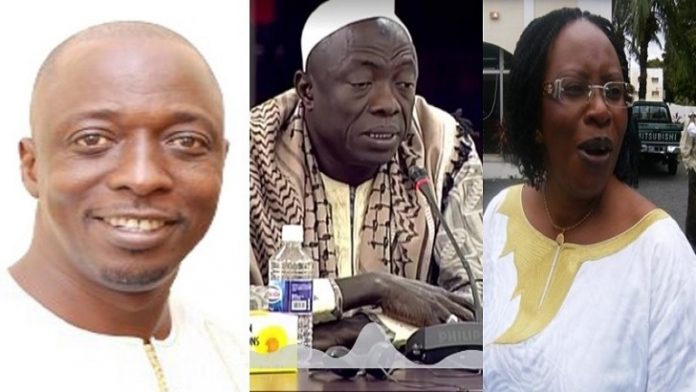 Alagie Kanyi, the first prosecution witness in the criminal trial involving the former AFPRC junta member Yankuba Touray and Speaker Fatoumata Jahumpa-Ceesay (FJC) told the Banjul High Court yesterday that the two defendants never told him not to cooperate with or give misleading testimonies to the TRRC.

The case is being heard before Justice Aminata Saho-Ceesay. Lamin Camara and Abdoulie Sissoho are representing FJC and Touray while AN Yusuf is the state prosecutor. FJC and Touray are facing charges of interference with a TRRC witness and criminal conspiracy.
Kanyi, a former army drill sergeant, was cross-examined on his court testimony and the two statements he made at the police station. An Africell printed call log of the conversation between Alagie Kanyi and the two accused persons was tendered by Sissoho.
During the cross-examination, Kanyi told the court that the two accused persons never told him not to cooperate or give misleading testimonies to the truth commission.

Camara pointedly asked Kanyi: “From your conversation with the second defendant [FJC], has she asked you not to cooperate with the TRRC?” Kanyi answered: “No.”
Asked who initiated the first conversation, Kanyi replied, “I don’t know.”
On the statement he made to police investigators on 7 March, 2019 Kanyi indicated that he received a call from a lady who claimed to be FJC adding that this was prior to Yankuba Touray calling him. He stated that the lady advised him to take care of his mother so that she could continue to pray for him.
“Is that your statement?” Camara asked. Kanyi said it was but noted that the statement was incomplete.

Kanyi said FJC did not in any way dissuade him from appearing before the TRRC and did not in anyway encourage him to lie before the TRRC or conceal evidence.
He gave similar responses regarding his 10 March 2019 statement to police investigators.
Kanyi said he could not remember what he told the TRRC regarding his conversation with FJC and did not tell the investigators that he solicited help from her and did not also tell the TRRC investigators that after his initial call to FJC, he called her again. “I can’t remember telling them that,” Kanyi answered.

Yankuba Touray
After reading a statement dated 7 March and 10 March 2019, the prosecution witness said the handwriting wasn’t his.
When Sissoho pointed out to him that the contents of his statements varied, he replied, “I don’t know”.

Kanyi said he received a call from a person who identified himself as Yankuba Touray. He said the person asked him about the TRRC and told him “don’t mind them”.
“Did you ask Yankuba Touray what he meant by ‘don’t mind them’?” Sissoho asked.
“I can’t remember that… I did not ask him,” Kanyi said.
Kanyi said Touray called him on a cellphone with the number 76*****.
At this juncture, Sissoho applied to tender the Africell call log between the accused persons and the witness. But Counsel Yusuf objected that Kanyi was not the proper witness through whom the document should be tendered.
But the judge overruled his objection.
The trial continues.