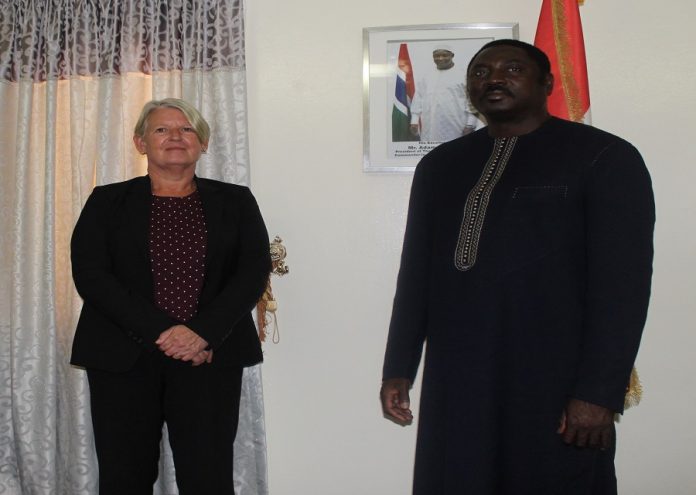 The Minister of Foreign Affairs, Dr Mamadou Tangara, yesterday held a meeting with the outgoing High Commissioner of the United Kingdom to The Gambia, Ms Sharon Wardle in his office in Banjul.

Minister Tangara commended Ms Wardle for the progress registered in the bilateral relationship between The Gambia and the United Kingdom since the advent of the new democratic government of President Adama Barrow.

He informed her of President Barrow’s appreciation of gains registered in the area of strengthening cooperation between the two countries during her tour of duty and expressed confidence that more positive outcome will be realised in our already cordial relationship.

In her remarks, High Commissioner Wardle who is also the dean of the diplomatic community in The Gambia, expressed her optimism about the future of The Gambia. She thanked the minister for the support rendered by his ministry towards enhancing the work of the British mission in The Gambia. The two sides discussed ways and means of containing the deadly Covid-19 pandemic and also exchanged views on pertinent issues crucial to the strengthening of bilateral cooperation between the two countries.
Ms Wardle was appointed ambassador to The Gambia in July 2017. However, her designation changed to high commissioner following Gambia’s return to the Commonwealth in 2018.