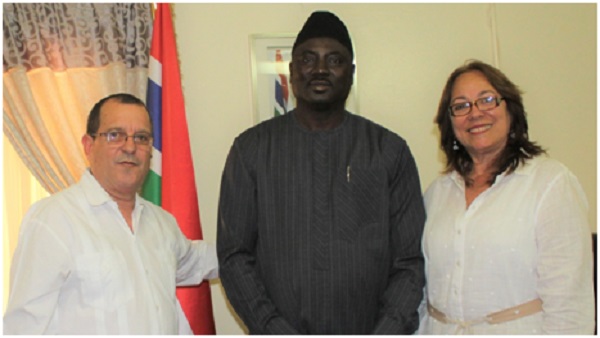 Banjul, 16th January 2020-The Honourable Minister of Foreign Affairs, International Cooperation and Gambians Abroad, Dr. Mamadou Tangara, on Monday 13th January received the Ambassador of the Republic of Cuba to The Gambia, His Excellency Rubén Abelenda.

Ambassador Abelenda was accompanied to the office of the Foreign Minister by one of the Cuban Doctors in The Gambia and also an Interpreter who works at the Cuban Embassy.
After the exchange of pleasantries, Foreign Minister Dr. Tangara assured the Cuban Ambassador of The Gambia’s unflinching support to the Government and People of Cuba.
He used the opportunity to inform Ambassador Abelenda that His Excellency President Adama Barrow is very passionate about Cuba and her People. He added that some of his Cabinet colleagues including Minister of Health, Minister of Environment and some others who previously visited Cuba have all been passionate about the country.
Minister Tangara extends best wishes to the Government and people of Cuba on the commemoration of Cuba’s 61st Independence Anniversary.

On his part, the Cuban Ambassador seized the opportunity to inform the Foreign Affairs Minister of the forthcoming 61st Independence Anniversary of Cuba. Ambassador Abelenda thanked Minister Tangara and expressed profound gratitude to The Gambia Government for her sympathetic stance and continued support extended to Cuba.

To this end, he extends official invitation for H.E. President Adama Barrow to visit Cuba. Ambassador Rodriguez also expressed appreciation with The Gambia’s current Chief of Defense Staff whom he met whilst he served as Ambassador in Cuba.
He finally informed the Hon Minister of the upcoming United Nations Population and Development Programme on Agenda 2030 in New York, adding that Member States have formulated certain agreements, which need approval.

The Gambia and Cuba have brotherly bilateral relations and have been supporting each other in different fronts. Cooperation between the two countries centred on Cuba providing support to The Gambia in the area of health while The Gambia provide support to Cuba’s interest at the international foras.