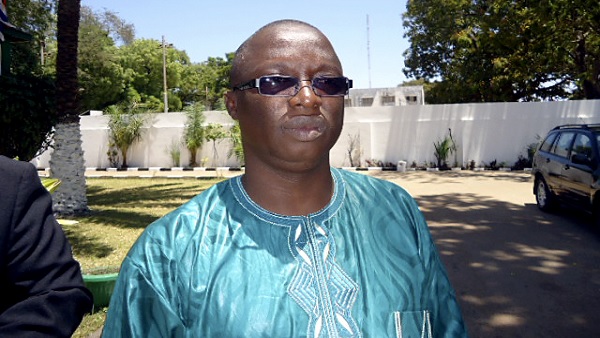 Former health minister, Omar Sey has vehemently denied Minister Dr Ahmadou Samateh’s claims that funds that were meant to fight Ebola were mismanaged.
Minister Samateh told lawmakers last Saturday during the debate on the extension of state of emergency that the Ebola funds were wasted and equipment which were said to be procured never reached the country.

But Sey, who was the minister of health during the outbreak of the Ebola crisis, countered: “The money never came to the ministry of health. It was all handled at the level of the UNDP and the procurement process was also done by the UNDP.We were just handed the materials and everything”.

Sey further stated when the Ebola outbreak was reported in the sub-region, the government set up an Ebola response task force but no money was taken from government because this was around end of year.

“We worked with the UNDP and there was a donor conference in Dakar which I attended with the finance minister and presented our plan. The plan attracted lot of interests from the UN and CSOs who really wanted to help,” he said.

He said the plan was further channeled to the UN South-South Cooperation platform and the Japanese government decided to fund some of the activities.
“And all those funds came through the UNDP as the middle body responsible to build point of entries in the border villages, procurement of motor bicycles, ambulances, pickup trucks and some equipment including the ones at the airport”, Sey said.

EU fund
The former minister said the European Union funds “never came to them directly. It was channeled through the WHO office in The Gambia and the WHO regional office for Africa had already identified a technical assistant officer in The Gambia at the UN office. We met this person on weekly basis.

He said after the implementation of each activity, a monitoring and evaluation is done by the ministry and WHO and retirements were made through the WHO focal person.
“Government never allocated us money even though I was asked to come for money and I said no, because I knew all what we had projected was in place. So when he (Minister Samateh) talked about misuse of Ebola funds, I don’t know where did that happen. It is very disheartening and if that was the case the WHO, UNDP and EU would have queried or I would have been called to the Janneh Commission,” Mr Sey added.

Allowances
He said when the issues of paying allowances came, he made it clear that they cannot pay allowances because there was no Ebola in The Gambia and he could not justify allowances for people who were part of the rapid response team, who were receiving their monthly salaries anyway. “I am proud to say that all the materials the current team is using since the start of Covid-19 are left overs of the Ebola materials,” he said.

Fuel coupons
Reacting to Minister Samateh’s claims that a former health minister recently called one of the ministry’s program managers requesting for fuel coupons, Sey said: “I read it and it was very funny to me and irrelevant. What is relevant about asking a program manager for coupon. When I was a minister people came to me for help and I helped when I can. We are not in government but we are mobilising resources for the ministry but nobody is talking about that. But only coupons. We are not poor. We are not desperate. I really saw that as very petty and unfair.”

He said from January to now, he has mobilised lot of things for the ministry including D10, 000 medical support. “I was the first person to facilitate donors of posters for this Covid-19,” Mr Sey concluded.