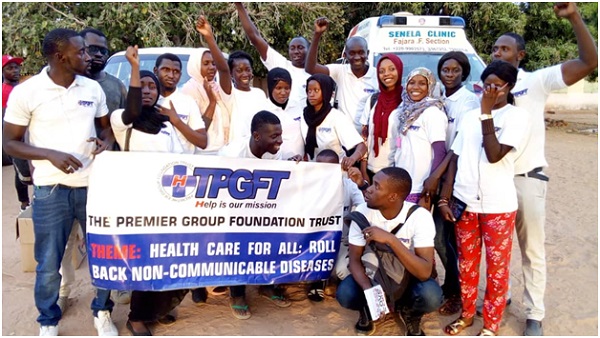 The outreach also educates and inspire these people in all aspects of health with special emphasis on hypertension and diabetes.
Organised under the theme ‘health care for all; roll back non-communicable diseases’, the Baddibu outreach was led by young university trained nurses, student nurses, teachers and businessmen.

Sankung Minteh, CEO and founder of TPGFT, said the movement is a charity founded in 2018 by a group of young individuals who recognised the need to contribute to national development.
“Basically, we embark on mainly medical activities.”
“We give free medical care and medication to people in hard-to-reach places… and where there are no proper health facilities.” Minteh said.

Julaba Dampha, who represented the alkalo of Noo Kunda, said of the importance of the outreach: “Dealing with health is so expensive in our area here. To have a free health care service at our own doorsteps, is something very big to us. We are delighted and we are grateful for such noble gesture [which is] also a plus for national development.”
Muhammed Lamin Jammeh, a native, said it was the village’s hope that the initiative would now be conducted annually to promote greater health in the community.
Other speakers were Dr David Demba, and patient Fatoumatta Conteh.