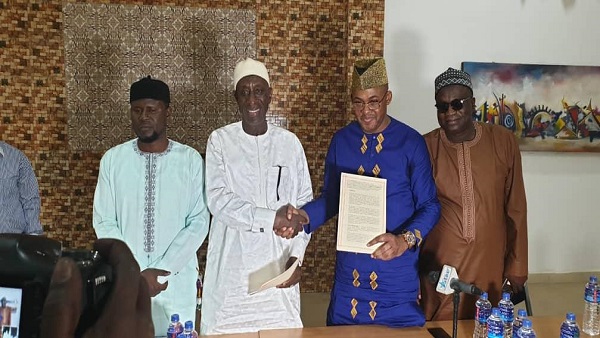 Group Consortium Africa, a leading housing provider in Africa has signed a twenty-five million dollars housing project with its Gambia partners yesterday in Banjul.
The initiative is launched to address the dire housing needs of low income earners in the country. The project will construct three thousand five hundred houses not later than July, according to the officials.

At the signing ceremony hosted Theophane Martial Nikiema, President of Group Consortium Africa expressed his delight for the milestone registered, disclosing that providing affordable and durable housing for low income earners is the hallmark of his company’s intervention in Africa and Gambia will be no exception.

According to him, the project will go a long way in providing housing to the nation’s teeming number of nurses, teachers, industrial workers, service men among other low income earners as a start and will continue to expand as the company grows in the country.

He extended thanks to his Gambian partners as well as the government for all the efforts rendered in actualising the project, adding that Group Consortium Africa is currently operating in Burkina Fasa, Ivory Coast, Benin and now The Gambia with a potential to grow across the continent.

“This project will not only provide housing units to Gambians but it will also create employment opportunities to many Gambian youths and there is no doubt that this project will significantly reduce the ‘back-way’ syndrome in the country. We want to encourage all Gambians especially the low income earners to join this scheme in a bit to own their own compounds in the country,” said Mam Sait Njie, Group Consortium Africa Partner in Gambia.

Mr Njie said the dire need of housing for low income earners coupled with the despicable conditions most of these people live through, all inspired them to forge partnership with Group Consortium Africa to address these sufferings of many Gambians. He explained that workers interested in owning homes will be charged with monthly payments for a period of ten years.

Speaking at the occasion, Hagie Baniko Sissoho, Proprietor of Star TV and Radio who is also a partner in this initiative said the project is monumental, adding that this partnership with Group Consortium Africa will help Gambians overcome housing problems and make home owning simple and easy for many.

“This project will significantly reduce unemployment among the youths of the country who are forced to venture into life threatening situations. It will provide five thousand jobs for the youths as well as provide income generating activities for many other youths,” Sissoho disclosed.

Baniko applauded the government of The Gambia for rendering all the needed supports through the ministry of local government and lands, adding that government cannot do it all but the participation of every citizen the country can develop faster than expected.
“I want to thank Group Consortium Africa and the partners on the ground for coming this far, there is no doubt, this project will go a long way in addressing the poor housing condition of thousands of Gambians especially the low income earners. I am encouraging low income earners working in and outside of government to take advantage of this project in fulfilling their dreams of owing their own houses,” Star TV/Radio Proprietor submitted.