Gambian businessman surprises employee with new car worth over 2M 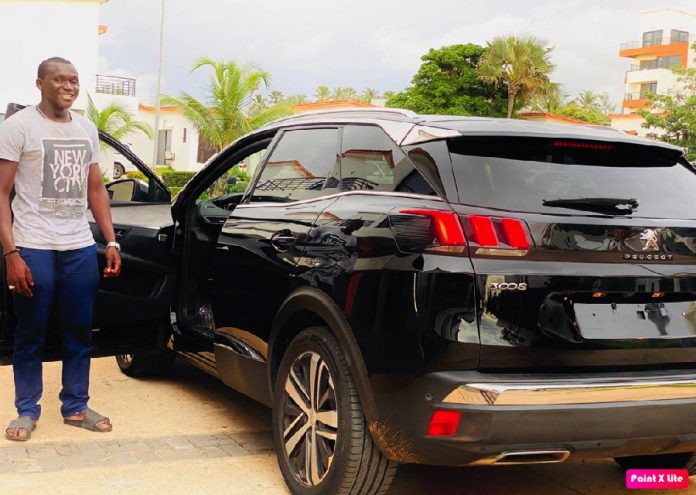 A five minutes video showing a Gambian businessman surprising his “most loyal and hardest working employee” with a brand new car went viral this week with more than 100,000 people viewing it on Facebook.

The businessman was later identified as Alasan Gent Ceesay, the CEO and founder of Rahma Gambia Ltd, one of the few Gambian owned businesses in the food and commodities in the country. The lucky staff was named as a Fakebba Ceesay (not related), the operations Manager. The band new Pigeout is worth more than 2 million dalasi.

In the video, which has since garnered a lot of goodwill on Gambian social media users, the staff could be seen gasping for air in disbelief. Managing to piece together a few words, he said, “Alas [referring to his boss], this type of [surprises] could kill people”. On a separate post on his Facebook timeline, Fakebba expressed gratitude to the benefactor, saying only God could reward Alasan for his gesture:

“My biggest gift in life. I don’t know what to say. Thank you very much. Only ALLAH can reward you. I am so happy and speechless.”

CEO Alasan Gent Ceesay said the gift was a token of appreciation “to say thank you for the wonderful job he has been doing at Rahma”.

“This car gift is nothing compared to the loyalty, hard work, and commitment this gentleman is doing to make sure the company keeps moving forward. Employee recognition will put a smile on a person’s face, therefore making him happier and creating an overall better workplace,” he added.

After being handed the keys to his brand new Peugeot Press 2020, the operations supervisor, true to his form, explained that the car would ease his job of monitoring and quality assurance in the entire value chain system.

A few weeks earlier, CEO Gent Ceesay, in a similar surprising move, also came to the aid of a needy nonagenarian and her adult disabled son in Jarra Soma. Upon seeing the old woman’s plea for assistance on the popular What’s On Gambia platform, Mr. Ceesay decided to take charge of the welfare and wellbeing of the old lady and her family for life.

He has since started renovating her house and donated two sets of beds, bags of rice, and a monthly cash allowance.