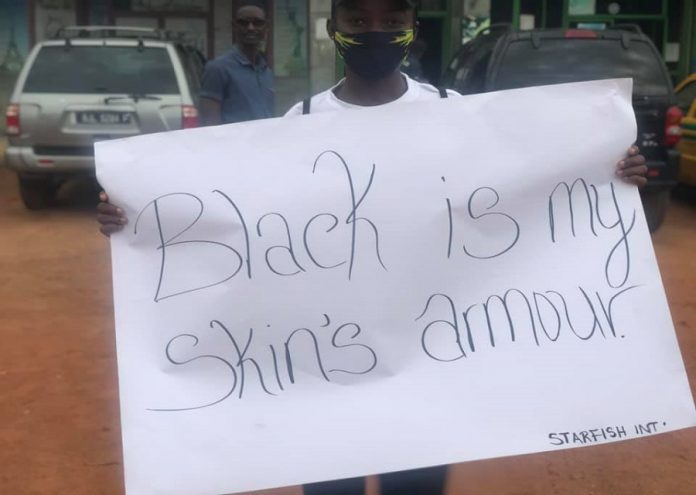 Scores of Gambians braved the inclement weather on Saturday morning to hold a protest gathering opposite the US Embassy in The Gambia.
The protesters delivered a petition letter to a representative of the US embassy which read:

“We, the undersigned Citizens of The Gambia, hereby express with grave concern the death by shooting of a compatriot Momodou Lamin Sisay by the US Police in Georgia involving the Snellville and Gwinett County Police Departments on 29 May 2020. We consider the death of Momodou as a gross violation of his human rights in which the police employed excessive force and violence. We do not think that a traffic stop should culminate into a fatal shooting of a man by police officers who are expected to be well trained, professional and disciplined, as well as his protector.

Hence we hereby call on the government of the United States of America to take all necessary steps with urgency and thoroughness to investigate this incident to ensure justice for Momodou and accountability of officers responsible for his murder.
This petition is coming in the wake of the senseless, blatant and racially motivated murder of George Floyd by an officer of the Minneapolis Police Department on 25thMay 2020. As Africans we are deeply concerned at the consistent and constant spate of police shootings of Black people in the United States of America. In most of these cases the police and US authorities would seek to construct and promote a stereotypical narrative that blames the victims for their death. It is only when police videos are obtained that it became glaringly evident that the officers actually acted wrongfully and illegally towards Black victims, leading go their violent death.

As Africans we consider this impunity to be unacceptable and a gross violation of the civil rights of African Americans in total contravention of the Constitution and civil rights laws of the United States itself. As Africans on the continent we have a particular interest and duty to our fellow brothers and sisters in the United States simply because, not only are they our kith and kin but also because African Americans equally deserve to be treated with dignity, respect, honour and justly, like their White compatriots. The credo ‘We hold this truth to be self-evident that all men are created equal….’ must apply to all men and women without distinction. This ideal should define the very character of the American State, one for which Kunta Kinteh, Harriet Tubman, Sojourner Truth, Frederick Douglas, Booker T Washington, William DuBois, Martin Luther King Jnr and Malcolm X among many fought and died to achieve for their people.

In light of the above, we therefore hold that the United States government has a non-negotiable duty to ensure that all of its citizens are treated equally at all times. We hold that when the United States government trumpets the call for human rights and democracy around the world, to the point of waging wars and imposing sanctions on various governments and groups for their gross violations of rights and undemocratic behaviour, then that government must be seen to be exemplary and proactive in the protection of the rights of all of its citizens within its own borders. Indeed, we are deeply concerned that this has not been the case for itsAfrican American citizens who continue to bear the brunt of unjust police actions and other forms of discrimination and injustice from federal and state institutions.

We expect nothing from the US government other than to fulfil the promise of civil rights as espoused in the Emancipation Proclamation of 1863 – 157 years ago – and all of the human rights ideals that are espoused in all of the statutes mentioned above that were delivered to American citizens especially to the African American. This is all we demand and expect from the Government of the United States and its various institutions and officers. No more. No less.

By this petition, we wish to therefore put it to the US government that the Gambian citizens uncompromisingly demand justice, equality and freedom for all African-Americans and African migrants in the United States.

In our quest to achieve this objective, we will henceforth intensify and forge links, mobilise and organize all African citizens and groups as well as pressure all African governments and political parties in Africa to demand an absolute end to institutionalised racism, police brutality, discrimination and injustice against African-Americans immediately and in any case in our lifetime. We urge the current US leadership to take a firm and unequivocal stance against racism and police brutality and ensure its criminal justice system respects, protects and fulfils the human rights of all citizens and migrants.

As Martin Luther King Jnr noted, injustice anywhere is a threat to justice everywhere. Hence we hold that the gross violations of the rights and dignity of African Americans is a direct threat to the lives of Africans from the continent. This fact has been glaringly manifested in the murder of Momodou Lamin Sisay just as in the brutal murder of Amadou Diallo from Guinea who was shot 41 times by the New York police in 1999.
We demand justice for Momodou, George Floyd, Ahmaud Aubrey and all departed souls in the hands of the US Police.

In light of this petition we therefore demand the following:

1. Release the police videos on the shooting of Momodou Lamin Sisay.

2. Conduct thorough investigation of all incidents of police brutality against Blacks in the United States and ensure full justice and accountability.

3. Conduct constitutional, legal and institutional reforms to weed out and end structural racism and to actively criminalize racism in all forms.

5. Reform American education system to fully introduce African and African American history to highlight the contribution of Africans to world civilization and to the building of United States of America.

6. Provide reparations to African Americans with direct and huge investments in the provision of services, facilities and opportunities for their social, economic and cultural development.

7. Uphold and practice democratic values and protect the human rights and dignity of all.”