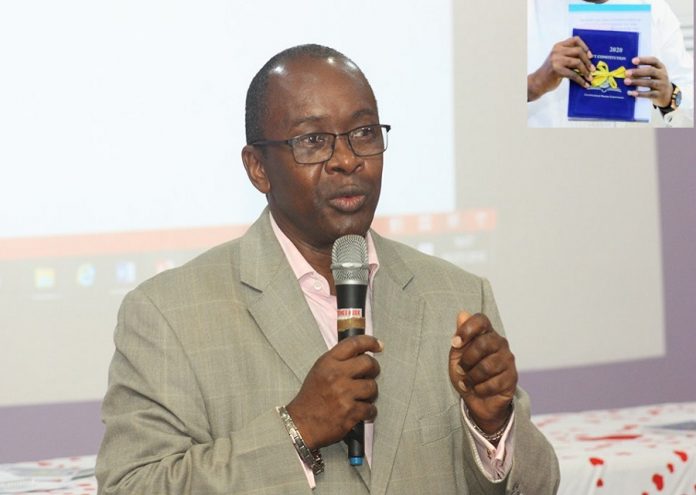 It was rather silly of Mr. Cherno Sulayman Jallow, Chairman of the Gambia Constitutional Review Commission (CRC) to sit there on a TV interview asking his critics what they had offered after being accused of plagiarizing and delivering the Kenyan Constitution to the Gambia government, calling it their own final draft.

Trying to deny what they did-plagiarism-by calling it an adaptation exercise is exactly what plagiarism means especially if the owner of the intellectual property was not formally consulted for permission.

Can someone tell me whether they had at any time formally asked the permission of the Kenyan government to adopt and adapt their constitution, before embarking on the exercise? If they did not, then accusing them of stealing a country’s intellectual property best described in this case as plagiarism will be perfectly apt.

However, if they did, why keep it so secretive to the public until scholars found out later and denounced them for the fraud?
After all, at the point when they had to seek the permission of the Kenyan government, if they ever did, to modify their constitution for The Gambia, one would expect the full involvement of the government and even the knowledge of the members of the National Assembly.

But did President Adama Barrow and the great Justice Minister Tambadou even know about the commission’s decision or intention to consult the Kenyan government to use their book? If not, was that not jumping the gun or illegally bypassing authority? Or do constitutionalists on the job for “thirty-years” as claimed by Mr Jallow enjoy the liberty of adopting other nation’s constitutions for other countries without formal authorization?
Anyway if Barrow and Tambadou were aware, then shame on them for wasting the time of everybody into thinking all along that Mr. Jallow and his team were working on a document purely original. Mr. Jallow could have certainly saved valuable time by earlier putting the Gambia National Assembly members in the picture, allowing them to start reviewing the book they were expected to eventually approve. In that case, by the time they finished the adoptation or “draft”, the NAMs would have been pretty much familiar with the overall content, making it easier and faster for its approval without any controversy. They even might have warned the CRC not to go to Kenya for one readily available somewhere nearer and perhaps better.

It could be very possible that the critics he is annoyed with for not contributing anything when “they asked” couldn’t simply because of the trust they had had on them to produce a perfect charter, given the hyped up caliber of participants and their methodology initially introduced to the Gambians. What a joke!
Without doubt if they had told the Gambians, which I think honesty should have compelled them to do so, that they were working on the Kenyan Constitution, most scholars would have secured a copy of the book and used it to contribute or ask questions.

They have toured the entire country and the world over but never for once gave the impression that they were plagiarizing, oops, “adopting” the Kenyan constitution for the Gambians.

That is why people cannot be blamed when they argue that the traveling to consult Gambians in and out of the country was insincere, useless and just another scheme to steal per diem money for personal enrichment. Of course, it would have been easier and far cheaper if they had worked on virtual-consultations from their office at the Futurelec building instead of the wasteful “tourism”. By the way, were folks consulted in the diaspora aware of the Kenyan constitution behind the whole review exercise? I doubt it.

In fact Gambian constitutionalists have said that the 1997 constitution was “adopted” or plagiarized from that of Ghana’s which was overwhelmingly approved in a referendum before its final adoption in the Gambia. Many people who had reviewed it at the time were disappointed with only the few changes done by the AFPRC government after it was finally submitted. Fundamental among them was the removal of the clause limiting the term of a sitting president to a-two-consecutive-five-year term or ten years maximum.

The Ghanaian constitution from a country we share a lot in common and geopolitically closer is still considered one of the best in Africa and could have been looked into again when it came down to plagiarism or adoptation rather than flying all over to East Africa for one relatively alien to our culture. I am sure that the1997 original drafted version submitted to the AFPRC government before being altered is still accessible somewhere and therefore could have been used with little effort and minimal expenditure. For a whopping cost of GMD116 million, I call it the the fraud of the century.

So far I have not read or heard one reasonable critic justifying the endorsement of the draft constitution, worsened by elements threatening Gambians to either keep it or settle for the boogeyman’s 1997 constitution “Jammeh’s”. Nonetheless, it is the same constitution they comfortably apply to suit their nefarious actives and condemned when it goes against their selfish interests. Don’t start me on how.

So far, I stand with those against the draft constitution considering all observations highlighted above. But most importantly, I detest the fact that those living in the diaspora are still not provided primary participatory roles in the country’s political and socioeconomic development drive. Constitutionally, those with dual citizenship in particular deserve better recognition than provided. And to deny them the opportunity to contest for the presidency is outright retrogression.

I visited Taiwan in 1997 and was lectured over how within three decades that nation was transformed from a third-world-agricultural economy to a modern and very developed industrial one. It couldn’t have been accomplished without a special policy enticing their scientists, engineers, doctors, politicians, businessmen or best minds living successfully in the diaspora to return home and be part of their development agenda. Most of them had dual citizenships together with their family members but were all offered special benefits and equal rights like all Taiwanese.

Among other attractions offered were the retention of their same salaries paid abroad and housing facilities they couldn’t ignore or reject plus other incentives that got their best minds back home. We have inexhaustible number of Gambian talents of all sort being exploited, overused and sometimes even abused by the Western madness to ever grow bigger and better. Our sons and daughters are managing engineering companies on strict principles of result orientation and still reserve some tappable nostalgia to bring them back to the homeland. And I believe the post-coronavirus period could be the best time for African governments to venture into the brilliant Taiwan initiative.

I only don’t believe that our bright minds will be keen to risk abandoning everything and coming back home to the kind of chaotic governments we have led by incompetent and corrupt leaders dragging our nations into the gutters.
Countries like Taiwan have a lot to live for and will do whatever it takes to build a successful and sustainable states free of destructive corruption and unconscionable politicians.