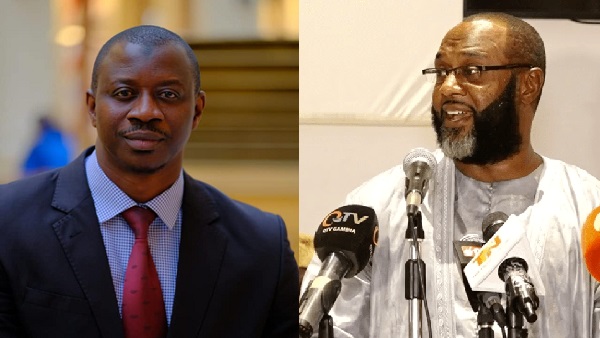 A moving political drama yesterday ended in an acrimonious split in the leadership of the Gambia Action Party, GAP.

The party announced it has expelled flag-bearer Gen Lamin Bojang, who had addressed a press conference to say he was charting his own way and alleging a conspiracy among his colleagues in the party.

The general, whose alleged nude video was circulating online, said he was a victim of scammers and conspirators who targeted him to tarnish his image and by extension his growing political career.

He added that ever since the ugly incident happened, a robust investigation was mounted by Interpol to trace the scammers who wanted to blackmail him into paying $5000. He said the trace led to people in Benin, UK and Senegal adding that they used a Facebook account of a Gambian.

“But what shocks me is that this video was first circulated by senior members of the Gambia Action Party who did not stand by me or show any solidarity,” Bojang said, adding that he would chart his own way and would let his supporters know what next. “I am today more resolved to push on and I am stronger today than ever before. I thank my wife, family and friends for standing by me and the media for not exploiting the situation with gory headlines. I am innocent and I will go to the bottom of this to prove my innocence,” he said.

Meanwhile, the GAP administrative secretary last night shared a letter with the press announcing the expulsion of General Bojang. The letter reads:
“All attempts were made within the National Executive to ensure that the image of the party and Gen Lamin Bojang remains clean and clear from the mess, but we have less control on what is published in social media platforms. Since the beginning of the scandal, everyone connected to the party stands in solidarity with you and until recently, you accused the Senior Members of the party for circulating the purported nude videos and photos in a press conference.

The National Executive Committee of GAP made the first attempt to lure you to an executive meeting but proved futile because you claimed to have coincidental family meeting. The purpose of this meeting is for the simple fact that the Executive Committee Members want first-hand information and your version of the saga. Until on the 12th of July, 2020 when you appeared in a meeting, a unanimous decision was made to suspend you from the role of the Presidential Candidate or Flag Bearer of GAP until the outcome of the ongoing investigation in a written letter but you pleaded for forty-eight hours. We want to make it crystal clear that your actions are unethical and are not in line with the constitution of the party, as well as our modus operandi. Thus, we unanimously agreed to expel you from the party and you’re no longer our presidential candidate effective on the 14th of July, 2020. Whatever grievances you had with any member of the party, the executive committee is capable to settle and proffer lasting peace and solution.”

However, when contacted for comments over his supposed expulsion, Gen Bojang said he had not been served with any expulsion letter nor was he heard by the party. “This is just a cover-up by the party. The message of expulsion cannot come without the party hearing from me. The party’s modus operandi doesn’t conform with the normal administration procedure. There is a meeting that is supposed to take place tomorrow with them and if that meeting is not held, they are not supposed to take any decision,” Gen Bojang said.