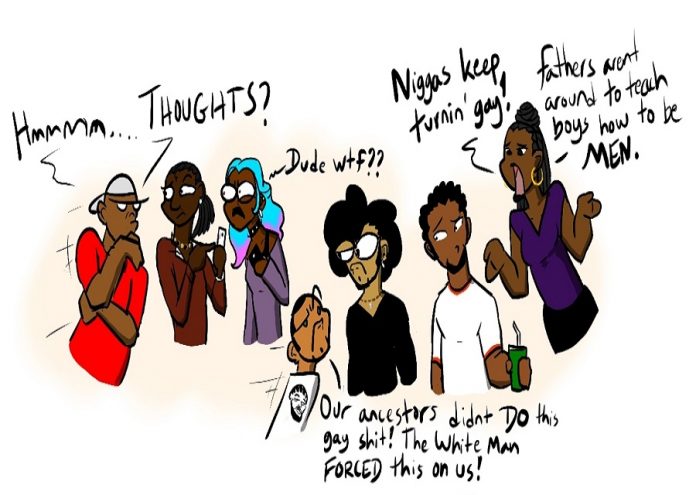 I will start today, this Friday, with the re-narration of a story I first heard from Wole Soyinka after apparently leaving Trumpland.One of the horror stories that emerged from the ISIS-controlled parts of Iraq was the gruesome tale of a mother whose only daughter was affected by wanderlust, even in that endangered zone. The little girl kept disappearing, marvelling at nature’s silence at repeated questions occasionally thrown at passing birds or even passing smoke from a launched rocket.One day, when the mother looked for her to attend to some home chores, she found that she had gone missing yet again. As she searched, she shouted in frustration: “As Allah is my witness, I’ll kill that girl when I catch up with her”. A neighbour overheard and reported her to the Hisbah (religious police). The mother was summoned by the mullahs who ordered her to put the child to death, since she had sworn by Allah to do so once she found her. Knowing a mother and her child, she refused. So, they grabbed the child by the legs and smashed her head against a wall. I know, that is a rather morbid note to start a Friday with. But the morals of the story, fiction or not, is that as long as we don’t have a bigger and more frightening authority above us making sure we are true to our words, we will always change our minds.

I guess what I was trying to say is that, having promised to write this week, Sheriff has reneged. Reneging seems to be a thing in the so-called New Gambia. Political Animal did. Mandela did. Now Sheriff did. The only one who remained true to his words is confessed jungler Alieu Jeng. He ‘didn’t did it’. But like Political Animal or Mandela, you cannot force the Bard of Cape Point to write, even after his promise, just like the mullahs killed the little girl because the mother promised to do so, albeit unintentionally. The week had all the markings of his essay, with The Gambia’s Pen—having drank from the wells of stoic wisdom—grioted Baba’s ancestors in order to massage his ego into writing. Still, nada. I think The Pen needs a new pen or just get caged, if he couldn’t make Baba pen again. It’s either that or I will be forced to conclude that the good writer is now only a good reader.

This world is ending. It has been ending since the beginning. But if the world is going to end episodically like Game of Thrones, then The Gambia will be Episode One. We have to unfold first while the rest of the world take solace in our miserable finality. If you work in the media, and your media house publishes something the bullish Gambian Internet habitués don’t like, then plebeians like my kind get terrorised all over. It is join-the-list. It is unethical. It is terrible. It is clueless. It is unprofessional. You look them up at workplaces and you would find that they siphon public wealth, nepotistic and morally depraved. But that stays in the closet. If you’re a young journalist or even studying journalism, one SINGLE ignorant Facebook post has the potential to make you switch careers. People who cannot even help their siblings with 6th grade assignment use and abuse the anonymity of Internet to spew venom. You look at them and laugh. You’d want to banter them all day because there are holes all over them. Even their hairs have holes. But, in just a split second, you realise their stupidity and instantly feel bad for them. It’s like laughing at a dog with a missing leg.

This week too, as always, The Standard stirred controversy. We always do. This time, however, a familiar old topic pretentiously made unfamiliar: gay rights. Of course, gay rights are new, even gay itself, the word, has been bastardised over the years. But homosexuality or, biblically, sodomy isn’t new, predating at least 20 prophets. Gambians aren’t ready for a human rights commission. In our parochial minds, torturing and killing are the only acts that constitute a violation of human rights. The rest are money-making convoluted campaigns that aren’t wholly respected anywhere. Informing the unsuspecting public that, hold on a minute, gay rights are also human rights, became an online ingenuous conversation. True, majority will always say no but the elite minority took it to a whole different level of absurdity.

The snapshots shared. The commission snared. It rapidly turned into a masturbatory for some elites, a vomitory for others, and an epileptic sanatorium for a self-reproducing number. I like reading articles from people who sometimes have a different view. The views should be reliable. But I realised that even intellectuals have a problem finding their balance when cornered to pick a side on whether we should allow our sexual organs to go in or welcome anything, other than the natural pairing. This whole gay thing is nothing but our insatiable desire to taste anything even with our THINGS. The story got published and noisome creatures, the nattering nit-wits of Gambian Internet warriors perched once again. A word of advice, if you didn’t study or practise journalism, stay in your lane. We have only one solution to bullying: a punch in the face and watch your nose bleed with blood oozing down into your mouth. I know you’re thinking the same, I’m violent today.

Human desires are so controlling and misleading that we often do things we would regret instantly. That include sexual oddities. Once you begin to feel a rising tingling and pulsating sensation, especially in sexual organs, the next action is to satisfy that urge whichever way possible, until your body gets rid of the annoying prolactin. I’ve seen men mate a donkey while others, a dog. The conversations however become problematic if a group wants to make it an acceptable way of life.

I recently watched a collection of speeches by African leaders on homosexuality. The pattern is and has always been that it’s un-African. Jammeh said we don’t have gay frogs. He actually didn’t know and never cared to find out. If one thing frogs are good at aside from jumping in the dark is climbing on each other’s back. I’m not privy to the knowledge of identifying the gender of frogs nor is Babili; something which would have given both of us the rare opportunity to know what the two frogs are doing. To say homosexuality is un-African is false. Maybe Mugabe needs to help me understand that claim. Oops, he’s no longer staggering on the podium at summits. Poor thing. Right, Kaguta Museveni is around. I’m sure he would tell me how much gays disgust him. It’s not just gays that disgust Kaguta; oral sex does. He said the mouth isn’t meant for sex, it’s for food. But even if every African agrees with our leaders that Africans didn’t know homosexuality, it is still false. We, however, can say our religions forbid it, since the first day it started. That is correct.That is the most genuine argument and defence.

The West is getting agitatedly serious about gay rights because what else would you do if your minority is suddenly becoming majority?It’s like gay genes are released in water tanks in the West, with the numbers hiking like Covid cases. It’s either they have always been gay or they just suddenly have the freedom to do something different.By the look of things, and judging by Africans’ continued resistance and defiance against LGBTQ, I think we will be recolonised. Only this time when we regain our independence, our first leaders would not be the Nkrumahs, the Lumumbas, the Kenyattas; we would instead have the Madi Jobartehs, the Immortals, the Ebou Sohnas. And then, lo and behold, Africa would consist of gay republics.

Introduction Exactly twenty years ago, I was called to the office of the US ambassador to The Gambia, George Haley, and invited on behalf of...
Read more
Essays

By Talib Gibran Growing up in Foni where power once gracefully seated, bad news from the urban areas took days if not weeks before it...
Read more
- Advertisment -