German Embassy donates sanitary materials to police worth over D1M 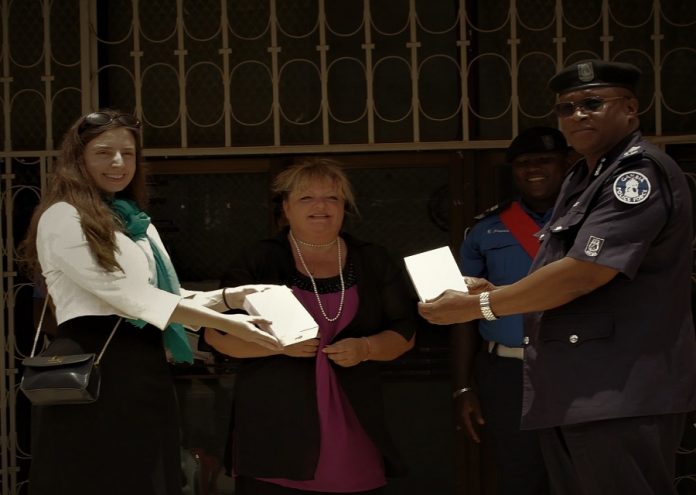 The German Embassy recently donated sanitary materials to the Gambia Police Force worth over one million dalasis to fight the COVID-19 pandemic.
The sanitary items were handed over to the officials at the Police headquarters in Banjul.
The items donated were 2000 face masks, 1150 hand sanitizers and 750 sanitizing sprays, 500 liquid soaps, 100 hand gloves (boxes with a 100 pieces each), 250 protective eyewears and 14 digital temperature readers.

Isabell Blöchl from the German Embassy said COVID-19 is a global crisis that does not just affect a single country or a continent, but the whole world. “That is why we have to stand together and help each other,” she said.

“As Chargé d’Affaires in The Gambia of the German Embassy I feel honored to be here today together with my colleague from the GIZ on behalf of the German Government to hand over these much needed personal protective equipment. To support the government of The Gambia and more specifically the Gambian Police in their fight against the spread of the virus,” she said.

She added that GPF is one of the key institutions in the fight against the virus.
She explained that police officers are responsible to enforce the various measures taken by the government. ”At the same time, the direct contact with the public poses a high risk of infection for the police offers.”

She further stated that hence the health minister, in a press conference on Friday, specifically recommended the use of face masks for anyone who goes outside. ”These are essential equipment for police officers in these times. They were procured as part of the ‘Programme to Build and Strengthen the Police Structures in Selected Partner Countries in Africa’. Since last summer Gambia is one of these partner countries. ”

She added that the equipment worth over 1million Dalasi on such short notice, especially the digital temperature readers were hard to come by.
She noted that the Gambia is important to Germany, not just in the framework of ‘Team Europe’, but also bilaterally. “That is also part of the reason why we have decided to strengthen our diplomatic presence in the Gambia. Since February I am the first permanent German diplomat in the Gambia.

It is especially important to us to see the process of democratization continue and the Security Sector Reform launched by the Gambian government succeed. “
She acknowledged that GIZ is one important actors in this endeavour. Another one is the German Police Support Team in the Gambia of the police of the State of Baden-Württemberg.

”We hope that COVID-19 does not delay the progress of the work, so that we can soon celebrate the completion of the whole project.”
Germany continues to stay engaged in the Gambia in many different ways and with and through many different partners, but the Gambia Police Force is and stays a very important one,” she said.

Mamour Jobe, Inspector General of Police expressed gratitude for the kind gesture.
He said the essential materials are timely and would go a long way in the fight against the COVID-19 pandemic.