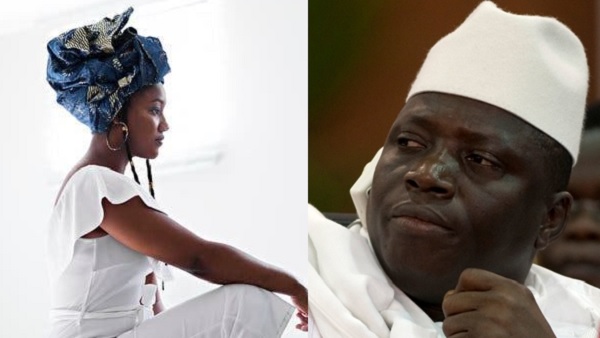 Ms Jallow, who has fled to Canada where she won asylum in 2015, made this claim in an interview with The New York Times published yesterday.

She said after the pageant, Yahya Jammeh soon began summoning her to State House, and eventually asked her to marry him. She said no.

According to her, when Jammeh summoned her yet again, for what she thought was a Ramadan event, he raped her.

“Reality hit me that this is my new identity,” she said.

“I’m just this girl the president will call and pick up and rape.

Everything I wanted to be, every potential and reason why I even went into this competition, all of that was shoved into the dumpster.”

The New York Times reported that at the time of the incident (five years ago) when Mr. Jammeh first summoned Ms. Jallow to the presidential palace, she was a teen and unaware of the scale of the accusations against the president.

“In order to know information like that, you had to be connected to the internet,” she said.

I was not very politically savvy as a teenager,” Ms Jallow told the paper.

She further disclosed that Mr. Jammeh had told her he wanted to talk about her beauty pageant project — a drama programme for students on eliminating poverty.

Then he offered her a job as one of his protocol officers, who performed secretarial work at the State House.

She was only 18, she told the president she did not feel qualified to work in a president’s office.

Later, reports emerged in the Gambian diaspora media that Mr. Jammeh had been using his “protocol girls” for sexual favors.
See page 14 for full details.

By Alagie Manneh According to Sheriff Kijera, chairman of the Gambia Centre for Victims of Human Rights Violations, even after three years since the end...
Read more
News

By Omar Bah The United Democratic Party in the North Bank Region has challenged the National People's Party to declare its source of funding. In a...
Read more
News

The Standard has reliably learnt that the appointment of the new Secretary General and Head of the Civil Service, Nuha Touray is in fact...
Read more
- Advertisment -